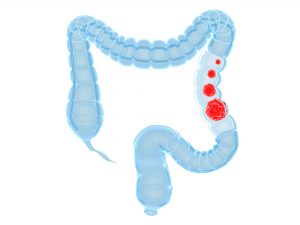 Researchers from the University of California, Riverside used mouse models to determine the distribution of P1 and P2 in the colon. They found that maintaining a balance between the two is crucial for reducing the risk of colon cancer and colitis.

Lead researcher Frances M. Sladek said, “P1 and P2 have been conserved between mice and humans for 70 million years. Both isoforms are important, and we want to keep an appropriate balance between them in our gut by avoiding foods that would disrupt this balance and consuming foods that help preserve it. What these foods are is our next focus in the lab.”

First author Kathikeyani Chellappa added, “Our study also suggests that finding a drug to stabilize one isoform should be more effective than targeting both isoforms for treating colitis and colon cancer.”

The epithelial lining of the colon has the so-called colonic crypts – finger-like enclosures that house stem cells at their base. These stems cells help regenerate new epithelial cells that migrate to the surface, completing the renewal of the intestinal lining every three to five days.

The researchers found that P1-positive cells were found in the surface lining and the top of the crypt, while P2-positive cells resided in the lower part. The study used genetically engineered mice that had either P1 or P2 only. The wildtype mice were used as the controls. When the rodents were exposed to carcinogens and irritants, the P1 mice showed fewer tumors compared to the controls. When mice were treated with the irritant alone, P1 mice demonstrated resistance to colitis. On the other hand, P2 mice had greater tumor count and higher rates of colitis.

Plausible results in P1 mice are explained by the enhanced barrier function that does not allow gut bacteria to enter the body. In P2 mice, this function was inadequate.

The researchers then observed the genes expressed in P1 and P2 mice. They found that P2 mice had a far greater expression of RELM-beta (one of the signaling molecules of the immune system) expressed in the gastrointestinal tract and associated with colitis, compared to the P1 mice.

Sladek added, “This makes sense since a reduced barrier function means bacteria can go across the barrier, which activates RELM-beta. We also found that the P2 protein transcribes RELM-beta more effectively than the P1 protein.”

Future study will explore how diet affects the P1 and P2 distribution in order to determine how obesity affects colitis. Second author Poonmajot Deol concluded, “In the case of colitis, could soybean oil be playing a part in allowing bacteria to get across the barrier function? We do not know.  We know its detrimental effect on obesity.  But more research needs to be done where colitis is concerned.”

Researchers at Oklahoma Medical Research Foundation found that certain sugars produced by the body play an important role in the development of colitis and colon cancer. The findings could potentially help aid in treatments for colitis, Crohn’s disease, and colon cancer.

The researchers studied O-glycans, a form of sugar produced by the body, that comprises nearly 80 percent of a thick mucus layer inside the colon and the gastrointestinal tract.

The researchers genetically modified mice to turn off their ability to produce O-glycans. As a result, the mucus layer vanished, and the mice developed colitis and colon cancer.

Lead researcher Lijun Xia said, “Colorectal cancers pose a significant healthcare problem and are the third most common cancers for both men and women in the U.S. But in order to solve this problem, we first have to know the cause. In this case, we think we have found a key to this.”

The researchers are now working on therapies to fix injured mucus layer and repair the sugars to treat colitis and prevent tumor development.

“Once you have a tumor, it can often be too late. Our discovery indicates that if we prevent or control colitis, we’ll likely prevent that tumor from ever forming. That’s significant,” Xia concluded.