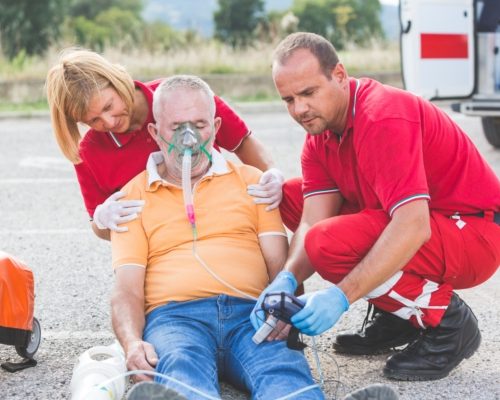 A heart attack takes place when the heart does not receive enough oxygenated blood as a result of a blockage. In the U.S., there is a heart attack occurring every 43 seconds, and the American Heart Association estimates that one million Americans suffer a heart attack every year. In fact, one in six Americans will die of a heart attack.

There is a high urgency to seek immediate treatment for a heart attack. The longer a patient goes without treatment, the higher their risk of death is. Signs and symptoms of a heart attack include chest pain, nausea, and dizziness, to name a few.

STEMI stands for ST-segment elevation myocardial infarction, and it’s the deadliest type of heart attack. In a STEMI heart attack, the coronary artery is completely blocked, so a big part of the heart muscle is unable to receive blood.

ST-segment elevation refers to the pattern that appears on the electrocardiogram.

An artery can be unblocked in two ways: through medication or angioplasty. Medication is administered in a hospital, but the success rate is only 60 to 80 percent. There is also a higher risk of serious bleeding associated with medications that unblock an artery.

Angioplasty, on the other hand, a procedure in which a small balloon is inserted into the body and inflated to mechanically open the artery, has more success. The success rate with angioplasty is 90 percent, but it can only be performed in specialized centers.

NSTEMI heart attack refers to non-ST segment elevation myocardial infarction. NSTEMI heart attacks occur due to the complete blockage or closure of a minor coronary artery, or partial blockage or closure of a major artery that was previously affected by atherosclerosis. (for comparison, STEMI is the complete blockage of a major artery that could have been affected by atherosclerosis).

A silent heart attack takes place when oxygen supply to the heart becomes reduced. There are many reasons why oxygen supply may become limited, including an obstruction in the arteries due to plaque buildup. The risk factors listed above can also contribute to the onset of a silent or regular heart attack.

Silent heart attack treatment in the hospital involves oxygen therapy to prevent your heart from overworking. Medications like aspirin, morphine, and nitroglycerine can be administered in order to relieve pain, open up blood vessels, and lessen the detrimental effects of a heart attack.

While in the hospital, you will be monitored to ensure no long-term damage has been done. In recovery, the doctor may prescribe daily medications or offer recommendations about lifestyle changes that are necessary to keep your heart healthy and prevent any future episodes.