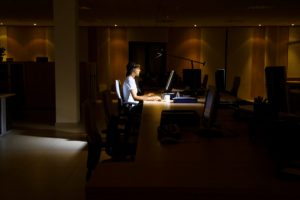 In America, odds are, you’re at risk of diabetes. That’s a fact. And what if your job is putting you at an even greater risk for the condition?

The Centers for Disease Control and Prevention (CDC) reports that 29.1 million Americans have diabetes. Of those, 8.1 million are undiagnosed, just carrying on with unhealthy habits that are bound to make things worse. Diabetes tends to be higher among seniors and most prevalent in American Indians and Alaskan Natives.

Diabetes comes in two forms: type 1 and type 2. Type 2 is the most common form we hear about because numbers are rising, even though it’s the preventable type. Type 2 diabetes results from factors like diet, weight, and activity level – all aspects we can control.

There are many ways you can prevent type 2 diabetes. Eating a balanced diet with fruits, vegetables, and protein is a good start. Avoiding foods that are high in sugar, processed, and fried is highly recommended as these can lead to obesity – another risk factor.

Physical activity is also important as it can aid in maintaining a healthy weight. But there is one factor in diabetes prevention you probably haven’t heard of or even considered. It’s the time of the day when you work. If you’re on the night shift, your risk of developing type 2 diabetes jumps significantly.

In this day and age, many occupations involve working night shifts, either because the work can only be done at night or the business runs 24 hours and requires round the clock workers.

Night shifts aren’t just exhausting for many of us. There is pressing evidence in support of the correlation between shift work and type 2 diabetes.

A compilation of 12 studies involving over 225,000 people revealed that those involved in shift work had a nine percent increased risk of developing diabetes. The link was stronger among men and those on rotating shift work – some days and some nights.

Although the studies were conducted in Japan, where working environments can differ from those in North America, consider this a warning. There are many factors leading to a diagnosis of diabetes, but a major link to night work is sleep disturbance. This relationship was also shown in the studies as a factor leading to type 2 diabetes.

Lack of sleep on its own is a major risk factor for developing diabetes. Add to that the stress and upheaval in sleeping routines of shift work.

The nights where the men got only eight hours resulted in higher levels of fatty acids in their blood, lasting for up to five hours in the morning. The longer the fatty acids remained in the blood, the harder it was for blood sugar to become regulated. The researchers noted this type of action to be similar in what occurs in pre-diabetes.

The conclusion? Lack of sleep can lead to the onset of diabetes as blood sugar is not properly regulated.

One study, published in Diabetologia, followed 28,041 black female workers for eight years. When the study began, none of the participants had diabetes. By the end of the eight years, 1,800 had been diagnosed.

Generally, in the United States, African Americans have a 13.2 percent prevalence of diabetes – coming in second highest after native populations.

Really, there’s no secret to preventing and managing diabetes. It begins with lifestyle changes. Proper eating, regular physical activity, smoking cessation and alcohol in moderation are the fundamentals of good health. When these factors are not controlled, they become causes of diabetes. These fundamental strategies, on the other hand, are your type 2 diabetes natural remedies.

Losing a few pounds is essential to preventing diabetes if you are overweight. Diabetes management, then, is as simple as making healthy choices, which will not only prevent and manage diabetes, but will prolong your life overall.

Knowing your risk factors is equally important in diabetes prevention. If you have a family history of diabetes, that in itself can be a red flag that you will need to take extra caution. Your ethnicity can put you at a greater risk, as we’ve mentioned, and should initiate a more proactive approach to diabetes prevention.

Reducing stress can also be an important lifestyle change for coping with diabetes . Stress has been known to aggravate and worsen many illnesses, and diabetes is not immune to the effects of stress. We know that shift work can be highly stressful! Meditation, exercise, and the right foods are all means to reducing stress, among other strategies.

Even if you can’t escape your nighttime job or shift work, make sure you are always getting a sufficient quality sleep. We all have to work, but we don’t have to let our jobs make us sick.

Forgetting healthy habits is easy when working nights. Pack your meals and snacks to make sure you’re not opting for takeout or the vending machine, and never skip a meal. Meal-skipping is hard on blood sugar regulation and has been linked to an increase in diabetes risk.

But you can beat the odds! By following these simple diabetes type 2 lifestyle changes, you can prevent the onset of the disease.

Alzheimer’s disease and type 2 diabetes share the amyloidosis link. Amyloidosis is the accumulation of amyloids, which are proteins that fold incorrectly. When proteins that are normally soluble in water are not folded correctly, they become insoluble and deposit in organs and tissues, disrupting the normal function. Continue reading…