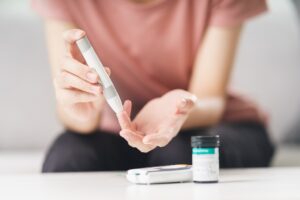 Type-2 diabetes seems like a disease that only affects the body, but it isn’t.

The brain of a person with type-2 diabetes or heart disease, for example, is at risk. When brain cells don’t get enough blood glucose, brain function will likely diminish.

A new study looking at data from 20,000 middle-aged and older adults showed that people with type-2 diabetes generally did worse on memory and thinking tests than people without it.

Further, MRI scans revealed differences in brain regions related to those skills: people with type-2 diabetes had more tissue shrinkage, equating to about a 26 percent acceleration in normal brain aging.

A shrinking brain is a normal part of life, and the study showed people with type-2 diabetes experienced shrinkage in the same areas of the brain as anybody else. Still, the difference was the timing: it happened much faster.

The lead researcher said it was like losing ten years.

The shrinkage could be caused by a couple of factors. One is that the blood vessels that supply blood to the brain become damaged, thus limiting the supply of oxygenated blood.

Another theory put forth by the team that conducted the study is that brain cells, which are high consumers of glucose, are essentially starved of it.

If type-2 diabetes impacts neurons’ ability to use insulin, they may starve and atrophy, ultimately leading to reduced cognitive function.

The findings were based on just over 20,000 adults aged 50-80 who are part of an ongoing research project called U.K. Biobank. On average, people with type-2 diabetes scored 13 percent lower on executive function tests, and processing speed performance was about 7 percent lower.

It’s possible that managing diabetes with diet and medication may help preserve mental function, but prevention is the best method. Paying attention to sugar intake and staying active is the best way to keep blood sugar in check and avoid type-2 diabetes.