Home » Colon And Digestive » Colon Health » Twisted bowel (volvulus) in adults: How the bowels twist and how to treat it 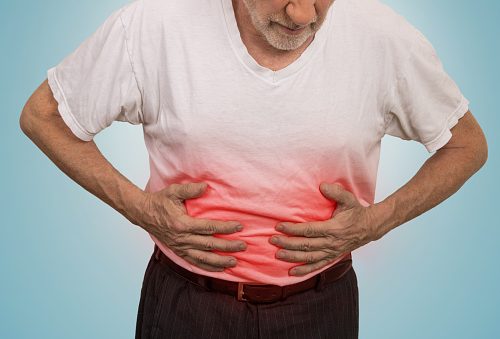 Having a twisted bowel is like having a twist or loop that results in the obstruction of fecal matter moving through the intestines. The medical term for the condition is termed volvulus and it can occur in the small or large intestine. It may be referred to as small bowel volvulus or colonic volvulus respectively. Where the twist and obstruction are located will dictate the presentation of the condition.

The most worrisome issue with a twisted bowel is that if the abnormality is not fixed in time, necrosis or cell death will occur due to the obstruction of blood flow to the area.

In the western world, the incidence of small bowel volvulus occurs in about 1.7 to 6.2 percent of adults. It may be the result of a primary cause occurring in the abdominal cavity or more commonly due to a secondary cause such as due to an anatomic malformation, adhesions, tumors, or diverticula.

What causes a twisted bowel?

Volvulus can develop in any portion of the large bowel, with the sigmoid colon being the most common and being due to mesenteric anatomy—the soft tissue that attaches the intestines to the wall of the abdomen. Having a long mesentery with a narrow base of fixation may predispose a person to developing a twisted bowel.

The answer to what causes twisted bowel is not always clear. However, there are particular clues and associations that the medical community has discovered that may contribute to the condition. The following are such causes:

What are the symptoms of twisted bowels?

Twisted bowel symptoms can often present differently depending on the particular underlying cause, with levels of severity also varying. Mild conditions of volvulus may not present with any serious complications; however, serious cases may lead the bowel to become starved of oxygen and nutrients provided by having adequate blood supply. Serious causes of twisted bowel result in intestinal strangulation, and if left untreated can lead to entire segments of the intestinal tract to die off.

Commonly reported symptoms of a twisted bowel include:

Having a twisted bowel will often present with the symptoms mentioned. While not all of these signs may be seen in your case, the symptoms you present to the doctor with will point to some abnormality occurring within your abdominal cavity, prompting further investigation.

The first order of business will often include ruling out any secondary causes such as a previous abdominal surgery causing adhesions or the use of any substances that affect bowel physiology. Once a cause is suspected, imaging tests will be implemented to get a better idea of how the bowel looks. Possible testing includes:

In mild, non-bowel-strangulation cases of twisted bowel, a person may be given conservative management, as it is possible over time for the bowel to move back into its normal position. This may include diet modification, colon cleansing/irrigation, and regular exercise
An emergency sigmoidoscopy or colonoscopy for decompression of the volvulus may also be utilized if the case permits it. occasionally, pressure from introduced air into the bowels can reduce the twisted bowel. This procedure is successful in more than 90 percent of patients with sigmoid volvulus, but only 10 to 15 percent successful in those with fecal volvulus.

Serious cases of volvulus will require surgery and are considered the best option for treating and preventing the possibility of bowel strangulation. Sugary often involves straightening the bowel so that it will return to its normal state. Cases where tissue death has already occurred will result in a complete or partial bowel resection.