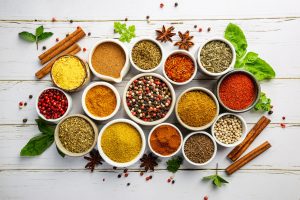 Wouldn’t you love to know who made salt the god of all of the seasonings? Why is it on everything and on every table you sit down at.

As far as I know, nobody ever called salt the “spice of life.”

America’s love for salt is a dangerous affair. High sodium intake can raise blood pressure, lead to electrolyte imbalances, and contribute to an increased risk for heart disease.

So here’s an idea: why not swap the salt for some other spices and seasonings? It’s likely you might like it better, or at least not be convinced to add more salt to your favorite meals.

A recent study focused on whether or not older adults (those 60 and over) could reduce salt intake by adding other spices and seasonings.

Researchers honed in on this age bracket because taste and smell weaken with age. It may lead to a weaker perception of salty flavors, propelling people to season food with even more salt.

The small study featured 39 healthy people over age 60 that taste-tested a white sauce formulation that is regularly found in ready-to-eat Cajun chicken pasta meals. Participants were given different versions of the sauce with varying amounts of salt and different spices and seasonings.

It turns out then when both herbs and chipotle were added to the sauce, participants could not taste the difference between the high- and low-salt sauces. However, the addition of herbs alone was less effective at masking low-salt samples.

Basil, garlic powder, and coarse ground pepper were some of the herbs they tried.

The findings, published in the journal Food Quality and Preference, suggest that spice, like chipotle, cayenne, and others may play a significant role in reducing salt intake among older adults.

So try spicing up your food! Specialty spice shops and even your neighborhood bulk store should have a good selection of spice and seasonings to add taste to meals. Just make sure they are pure without added salt!