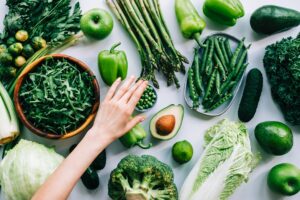 A case study of more than 900 adults found that foods featuring antioxidant flavonoids could offer brain benefits to older adults. Flavonoids are found in foods and drinks like berries, leafy green vegetables, tea, wine, and more.

The study, which was recently published in Neurology, found that people who ate a daily serving of leafy green vegetables slowed their cognitive decline by roughly 32 percent, compared to those who did not eat any flavonoid-rich foods.

The research team collected data on 961 adults, with an average age of 81, who did not have dementia. Over an average of seven years, participants completed questionnaires about their diet and took cognitive and memory tests.
Participants’ ability to remember lists of words and recall numbers and put them in order was tested.

The results showed a close association between higher flavanol intake and slower cognitive decline. It should be noted that the association was observational and does not prove that eating these foods improves cognition or delays memory and thinking trouble.

People who ate the most flavanols – about 15 milligrams (mg) per day (the equivalent of about 1 cup of dark leafy greens) – had slower memory decline than those who ate the least – about 5 mg.

The foods that seemed to contribute most to slowing brain aging were: