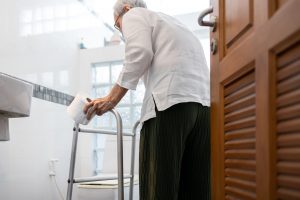 The possibility of a urine leak can be very taxing. It makes it hard to comfortably leave home and lead a fulfilling life. It can act as an inescapable dark cloud.

New research from Portugal is showing just how much urinary incontinence can affect mental health, particularly in women.

10,000 adult women took part in a Portuguese Health Ministry survey that is conducted every five years. Overall, one in 10 reported urinary incontinence, but that number quadrupled to four in 10 in women over 75.

Those reporting urinary incontinence were 66 percent more likely than others to be diagnosed with depression and were more prone to visiting the doctor for mental health reasons.

Women with incontinence were also 65% percent more likely to have a negative opinion of their overall physical health, reported more trouble concentrating, and have greater feelings of guilt and self-worth.

Further, it takes a while for doctors to diagnose the condition. It often goes unrecognized, which could be caused by a combination of several factors including patient embarrassment.

In any event, urinary incontinence can be treated in ways that either significantly improve its impact or even cure it. The key is early identification and treatment.

For some, bladder training will work. That would involve setting a bathroom schedule, sticking to it, and observing guidelines like going to the bathroom at a specific time even if the urge doesn’t hit, waiting to go the bathroom when the urge does hit, and pelvic floor exercises, also known as Kegels.

The real key, for you, is taking the first step to avoid the mental health ramifications of urinary incontinence.

Talking to your doctor about it early, as well as examining treatment techniques on your own – like fluid management and Kegels – can help you get a handle on the condition to help put your mind at ease.