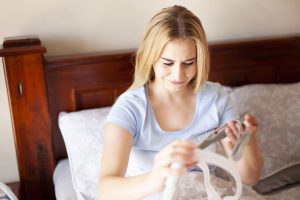 A new study from Michigan Medicine’s Sleep Disorders Centers has found that treating sleep apnea may reduce the risk of dementia among seniors. Researchers looked at patients who received positive airway pressure therapy and found that they were less likely to develop Alzheimer’s disease and other cognitive impairment issues later in life.

The study analyzed claims of more than 50,000 Medicare beneficiaries aged 65 and older who had recently been diagnosed with obstructive sleep apnea. Over three years, it was found that patients who used positive airway pressure therapy were less likely to receive a new diagnosis of dementia or mild cognitive impairment. These results were compared to patients who did not regularly practice positive airway pressure therapy.

Obstructive sleep apnea is a condition where the upper airway collapses throughout the night. This can prevent normal breathing which has been associated with numerous other health conditions, including neurological and cardiovascular diseases.

Dementia is a condition that is prevalent throughout the United States. Approximately 5.8 million American’s are currently living with the condition, which shows that steps need to be taken to reduce these numbers.