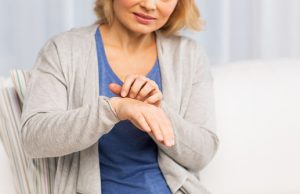 Chronic itch is an uncomfortable and irritating condition that can be challenging to deal with, but recent research seems to have discovered a potential new treatment that could help curb the urge to scratch.

Itching can be a sign of many different health conditions, but chronic itching is often due to something called chronic idiopathic pruritus. To date, topical therapies and UVB phototherapy (irradiation with short-wave ultraviolet radiation) have been two of the most popular treatments. Some people do gain relief from such chronic itch treatments, but others continue to suffer.

Research suggests that about 15 percent of the population experiences chronic itch. The itching is usually due to inflammatory conditions, like eczema and psoriasis, or it is linked to kidney failure, liver disease, nerve disorders, and certain types of cancer. There are also cases where chronic itching just can’t be explained, which makes it more difficult to treat. These cases are usually diagnosed as pruritus.

A team of researchers at Washington University School of Medicine in St. Louis recently identified immune-signaling molecules that activate neurons in the skin and thus cause chronic itching. During their study, the researchers found that people with itching from unknown causes (idiopathic pruritus) saw improvement when given a drug called tofacitinib (Xeljanz). This is a medication that is normally prescribed to people who suffer from rheumatoid arthritis.

Previous attempts to treat chronic idiopathic pruritus with anti-inflammatory drugs were not very successful, yet within four weeks of taking tofacitinub, a small group of pruritus patients experienced relief from severe itching. The findings were significant enough that they were published in the September 8 edition of the journal Cell.


While chronic itching doesn’t sound all that bad, studies show that it can actually be as debilitating as chronic pain. In fact, the experts involved in the Washington University study report that the patients they worked with often felt itchy day and night. Can you imagine the urge to scratch never going away? Although this latest research involved a small sampling of patients, the dramatic advancements in itching and improved sleep, as well as the ability to stop scratching, means medical researchers can now move on to larger-scale studies.

During the small-scale study, the researchers demonstrated that sensory neurons in mice and humans are activated by interleukin, which is an immune-signaling molecule. They discovered a link between the immune and nervous systems that suggests the immune molecule directly stimulates nerve cells, leading to itching. Additionally, they showed that interleukin can kick-start chronic itching independent of pathways associated with inflammation. This means that chronic idiopathic pruritus isn’t linked with inflammation, hence the reason anti-inflammatory treatments may be ineffective. The team of researchers then discovered that interleukin actually stimulates a key protein within nerve cells. Nerve cells are an important part of chronic itching. The drug tofacitinib seems to block this protein, which is known in the medical profession as JAK1.

Further studies on itching and tofacitinib as a treatment will focus on whether the medication can be modified to curb itching without disrupting a patient’s immune system.

Home remedies to soothe your psoriasis
Contact dermatitis, skin rash from allergens triggered by nickel in foods, daily use products