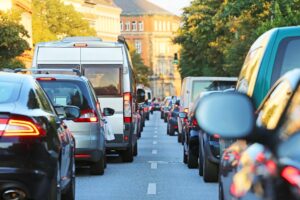 Did you know that living in a busy city or even a residential area can increase your risk for dementia? A new study has linked traffic-related air pollution to an increased incidence of the neurodegenerative disease.

Researchers found that for every one microgram per cubic meter (µg/m3) increase of fine particulate matter exposure, the risk of dementia increases by 3%. So, if you’re looking for a safe place to live as you age, consider moving to a rural area with less air pollution.

The research published in the Neurology journal reviewed 17 studies that included participants over 40. A total of 91 million people were reviewed, and of those, 5.5 million people developed dementia. The study adjusted for several factors that affect a person’s risk of dementia, including age, sex, smoking, and education.

When rates of air pollution exposure were compared, it was found that people who did not develop dementia had a lower average daily exposure to fine particulate matter air pollutants than people who did have dementia. The U.S. Environmental Pollution Agency (EPA) believes an average yearly exposure of up to 12 µg/m3 is safe.

This study found that the risk of dementia increased by 3% for every one microgram per cubic meter (µg/m3) increase of fine particulate matter exposure.

“While our meta-analysis does not prove that air pollution causes dementia, it only shows an association, our hope is these findings empower people to take an active role in reducing their exposure to pollution,” said study author Ehsan Abolhasani, MD. “By understanding the risk of dementia through exposure to air pollution, people can take steps to reduce their exposure such as using sustainable energy, choosing to live in areas with lower levels of pollution and advocating for reduced traffic pollution in residential areas.”

This study shows an alarming trend of how the environment may be increasing the risk of illness and disease. While more studies are needed to fully understand the link between traffic pollution and brain function, this is a stark reminder that living away from air pollution, even in a residential area, could benefit your health.

While some degree of cognitive decline is nearly inevitable as you age, other numerous factors can take a toll on the ability of the brain to function at peak potential, such as exposure to traffic pollution. This can affect memory, concentration, and overall brain function.

The Smart Pill can help to enhance cognitive function and memory through 9 ingredients that help to support, nourish, and maximize brain health. These include ginkgo biloba, huperzine A, bacopa extract, rosemary extract, and a B vitamin complex. This unique formula helps to boost circulation, fight free radicals, and provide nutritional support to assist with cognitive function.