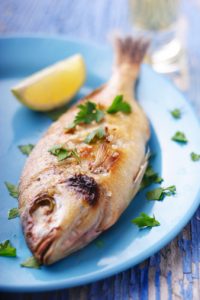 Fish is steadily gaining popularity as a natural source of Omega 3 fatty acids, a natural supplement that can help prevent cancer and mental disease. However, new research is showing that blindly following this trend may prove detrimental to your health.

Seafood–fish in particular–is becoming a staple part of the North American diet. While it does vary significantly by region, most people get at least 7% of their animal-based protein from fish. New research by a team of scientists from Saskatchewan University may change the popularity of fish. According to the researchers, certain toxic chemicals found in fish actually work to deteriorate vision.

A Chemical Toxin That Targets Your Vision

A majority of fish contain an organic form of mercury called methyl-mercury. Unfortunately, when you eat certain fish, these toxic chemicals are transferred into your body. Through a process called biomagnification, the concentration of organic mercury increases as you consume more fish.

On its own, this fact wouldn’t be too bothersome, but mercury has several proven negative effects worth considering. Problems like kidney failure, memory loss, and cognitive dysfunction have all been linked to this chemical and its toxic effect on the nervous system. In fact, recent research published in ACS Chemical Biology suggests that organic mercury may even impair your vision.

The link between mercury and deteriorated vision is not particularly new. Previously, it was believed that the toxic chemicals damaged the visual brain cortex – the part of the brain that deciphers data transmitted by the eyes. However, we now know that this is not true.

Dr. Gosia Korbas and his team conducted their research at the Canadian Light Source in Saskatoon. Their subjects: a school of zebra fish larvae. This may seem odd, but zebra fish and humans actually share a lot of commonalities in their genetic makeup and gene coding – 84% of the genes linked to human disease can be found in zebra fish as well.

The results show that the methyl-mercury accumulated on the photoreceptors in both the retina and the pineal glands of the zebra fish specimens.  The mercury accumulation has created worry for human eye health.


The Problem With Blind Consumption is Blindness

Photoreceptors, sometimes referred to as rods and cones, are tiny organs within the eye that are sensitive to light and color. They are the organs that allow us to “see.” The organic mercury forms a coating over these photoreceptors. The toxic chemicals then refract light entering the eye before reaching the photoreceptors, which may cause blurry vision, or vision with abnormal coloring.

Since fish are such a common source of animal-based protein and are commonly consumed, these findings may potentially have a global impact. Scientists are still exploring other effects of chronic, low-level exposure to methyl-mercury. For the time being, however, Dr. Korbas says that the public should at least be aware of the role organic mercury plays in causing vision impairments. This is will help individuals make informed decisions about their fish consumption.