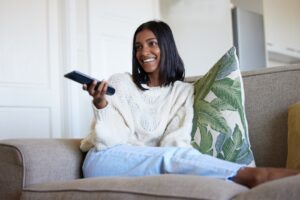 You may have heard about some of the downsides of spending too much time with screens: limited activity, anxiety, and trouble sleeping.

Now a new study is linking time in front of a particular type of screen and dementia risk.

Researchers found that older adults who spend a lot of time watching TV were more likely to develop dementia. On the other hand, those who spent a lot of time in front of a computer saw the risk decline.

So it appears that when it comes to dementia risk, the type of screen you use may matter.

But it may also depend on how you use the screen.

Watching television is generally considered “passive,” meaning you’re not really thinking or participating while doing it. A computer, however, presents many opportunities for “active” engagement that require the mind to fire.

A person sitting in front of a computer screen may be working, reading, or participating in a game that requires them to use their mind and be actively engaged. If the computer is largely used as a substitute for TV – watching movies, etc. – the results may not differ from those found with TV use.

Researchers looked at data from 146,000 participants taking part in the UK Biobank project aged 60 and older. None had dementia at the outset. Every participant reported various lifestyle habits like television watching or computer use.

Over the next 12 years, just over 3,500 participants were diagnosed with dementia. After controlling for a host of factors, researchers found that the more TV watched, the higher the risk for dementia was. Each hour of TV per day was associated with a 24 percent higher risk.

On the other hand, each hour per day of computer use was associated with a 15 percent decline in dementia risk.

The study authors point out that the results do not mean that television causes dementia or that spending more time in front of a computer will protect your aging brain.

A growing body of research suggests that physical activity, a healthy diet, and mental activity may all contribute to a healthier brain. Instead of watching TV, think about going for a walk or doing some “active” sitting with a book, puzzle, or computer.