Home » Health News » Too Lazy to Exercise? It Could Be This 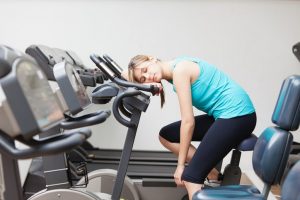 We all know that we should exercise, but for many of us, the willingness to do so is just non-existent. If you’ve ever wondered how some people are so motivated to go to the gym while you can’t stand the thought, then you’ll be interested to learn about the latest research findings out of the University of British Columbia.

Although there are several studies that highlight the benefits and importance of exercise, society as a whole is exercising less and researchers wanted to know why.

Researcher Matthieu Boisgontier explained, “Conserving energy has been essential for humans’ survival, as it allowed us to be more efficient in searching for food and shelter, competing for sexual partners, and avoiding predators. The failure of public policies to counteract the pandemic of physical inactivity may be due to brain processes that have been developed and reinforced across evolution.”

The study looked at young adults who were instructed to sit in front of a computer screen and controlled an avatar. Small images were flashed either depicting a physical activity or not. As quickly as possible, the participants had to move the avatar to the physical activity image and away from the inactivity images and vice-versa when instructed.

Participants were generally faster at moving the avatar towards activity images but brain activity suggested more brain power was used to complete this task.

Boisgontier added, “We knew from previous studies that people are faster at avoiding sedentary behaviors and moving toward active behaviors. The exciting novelty of our study is that it shows this faster avoidance of physical inactivity comes at a cost–and that is an increased involvement of brain resources. These results suggest that our brain is innately attracted to sedentary behaviors.”

Further research is required to determine if brains can be re-programmed so that they are inclined towards exercise. Bosgontier concluded “Anything that happens automatically is difficult to inhibit, even if you want to, because you don’t know that it is happening. But knowing that it is happening is an important first step.”