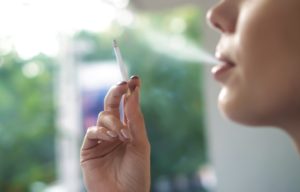 Research has shown that tobacco smoking is more common among people with mental illness, especially depression and schizophrenia. However, until now, there has been no evidence for cause-and-effect and in which direction. A new study published in Psychological Medicine poses the question, does mental illness increase the likelihood of smoking, or is smoking itself a risk factor for mental illness?

The study led by the University’s Tobacco and Alcohol Research Group (TARG) with support from the University of Bristol’s MRC Integrative Epidemiology Unit (IEU) and the NIHR Bristol Biomedical Research Centre (BRC) has found that tobacco smoking may increase risk of developing depression and schizophrenia.

For the study, researchers used UK Biobank data from 462,690 individuals of European ancestry, comprised of eight percent current smokers and 22 percent former smokers. Participants were treated with an analytic approach called Mendelian randomization. This approach uses genetic variants associated with an exposure to support stronger conclusions about cause-and-effect relationships. It was found that tobacco smoking increased the risk of schizophrenia and depression. However, it was also noted that the two mental disorders also increase the likelihood of smoking.

This study was important work that adds to a growing body of work suggesting that smoking can have adverse effects on mental health. The same group of researchers from this study had published a similar study in the British Journal of Psychiatry earlier this year showing evidence that tobacco can increase the risk of bipolar disorder.

Dr. Robyn Wootton, the Senior Research Associate in the School of Experimental Psychology and the study’s lead author, spoke about the study. “Individuals with mental illness are often overlooked in our efforts to reduce smoking prevalence, leading to health inequalities. Our work shows that we should be making every effort to prevent smoking initiation and encourage smoking cessation because of the consequences of mental health as well as physical health.”

Marcus Munafò, Professor of Biological Psychology in Bristol’s School of Psychological Science and senior author on the study added: “The increasing availability of genetic data in large studies, together with the identification of genetic variants associated with a range of behaviors and health outcomes, is transforming our ability to use techniques such as Mendelian randomization to understand causal pathways. What this shows is that genetic studies can tell us as much about environmental influences—in this case, the effects of smoking on mental health—as about underlying biology.”

This new research adds evidence to support the implementation of smoke-free policies in public areas. Smoking has not only been shown to be detrimental for mental health, but studies have also shown that excess mortality associated with mental illness is due to smoking. Quitting smoking greatly reduces the risk of developing smoking-related diseases. For help with quitting smoking, see a health care professional who will be able to offer a variety of treatments and resources for quitting.