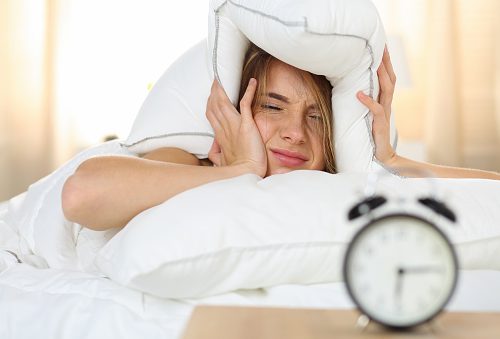 A study has found that tinnitus – ringing in the ears – is aggravated by insomnia. Over 36 million people suffer from tinnitus, a health condition that causes ringing, buzzing, or humming in the ears even when there is no sound present. This condition can result in a poor quality of life and health. The study revealed that the severity of tinnitus worsened among patients who suffer insomnia.

Coauthor of the study Kathleen L. Yaremchuk said, “Tinnitus involves cognitive, emotional, and psycho-physiological processes, which can result in an increase in a patient’s distress. Sleep complaints, including insomnia, in these patients may result in a decrease in their tolerance to tinnitus.”

The researchers conducted a retrospective study of 117 patients. The information was collected through phone interviews and written interviews using the Tinnitus Reaction Questionnaire (TRQ) and Insomnia Severity Index (ISI).

TRQ scores were found to be a valid predictor of sleep disturbances. The greater the insomnia disability, the worse tinnitus was found to be.

There is still much unknown about tinnitus, and current treatments are largely unsuccessful. Researchers from the University of Buffalo, Southeast University in China, and Dalhousie University in Canada made a major breakthrough in uncovering important insights into tinnitus which could aid in developing testable models.

The study suggests that neural networks are more expansive than previously believed. These findings could help create testable models to help identify which regions of the brain are associated with tinnitus.

The findings also revealed that the sounds that patients hear in tinnitus are not a result of the ear itself but due to something occurring in the brain. Functional MRI scans could help reveal which parts of the brain are included in tinnitus. It may not be a specific brain are, but rather neural networks.

Study author Richard Salvi said, “Certain brain regions become very active once tinnitus is induced, much more so than it is for an animal with normal hearing. Even though high-dose aspirin induces a hearing loss and less information is being sent from the ear to the brain as a result, the brain responds with greater activity. It’s paradoxical, like a car getting better gas mileage with a less efficient engine.”

“Other research has shown this activity, but what is novel about the current study is the amygdala pops up. This is the part of the brain that assigns emotion to our perceptions. Many patients report the onset of tinnitus after experiencing significant stress or anxiety. We think it’s not just the hearing loss that’s essential. There are other emotional factors working together with the auditory factors,” Salvi continued.

The researchers found that the reticular formation (network of nerve pathways in the brainstem) plus the hippocampus played some role in phantom sounds.

Salvi concluded, “We were shocked when this part of the brain popped up. Almost all parts of the network can be explained: location of sound, the emotional attachment, why people get aroused when they have tinnitus… we’re puzzled by the cerebellum involvement, but it might act like some kind of ‘gate’ that’s allowing the phantom sound to enter the consciousness.”

Another recent study uncovered that one in 10 Americans suffer from tinnitus. You can read about it here.