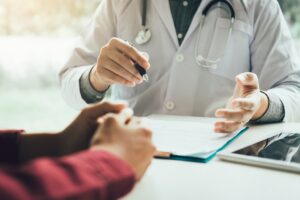 Depression is a serious mental health condition that can cause long-term adverse effects, such as dementia, if left untreated. Now research suggests that the timing of the treatment for depression may help to decrease the risk of dementia later in life. Read on to learn more about this finding and how you can get help if you’re struggling with depression.

Dementia is a disabling neurocognitive condition that mainly affects older adults. It is characterized by a decline in cognitive function and can lead to problems with memory, language, and thinking. According to the World Health Organization, over 55 million people worldwide live with dementia.

The majority of people with dementia are over the age of 80. However, dementia is not a normal part of aging, and younger people can develop the condition. There is no known cure for dementia, but there are treatments that can help to improve symptoms and slow down the progression of the disease.

A new study from China suggests that the link between depression and dementia could be altered depending on the timing of the treatment. Researchers used data
data collected by the UK Biobank, a population-based cohort of over 500,000 participants. A total of 350,000 participants were included in the study. During the course of the study, 46,280 people were diagnosed with depression and 725 of those developed dementia.

During the study, participants were placed in one of four categories of depression: increasing course, in which mild initial symptoms steadily increase; decreasing course, starting with moderate- or high-severity symptoms but subsequently decreasing; chronically high course of ongoing severe depressive symptoms; and chronically low course, where mild or moderate depressive symptoms are consistently maintained.

Researchers then set out to find if the risk for dementia could be lowered by receiving depression treatment. They found that overall, depressed participants who received treatment had a reduction of risk when compared to untreated participants by about 30%. The timing of the treatment also seemed to make a difference in the risk reduction.

“Once again, the course of ineffectively treated depression carries significant medical risk,” said John Krystal, MD. In this case, symptomatic depression increases dementia risk by 51%, whereas treatment was associated with a significant reduction in this risk.”

While some degree of cognitive decline is nearly inevitable as you age, this study shows how other factors, such as depression, can take a toll on the ability of the brain to function at peak potential. This can affect memory, concentration, and overall brain function.