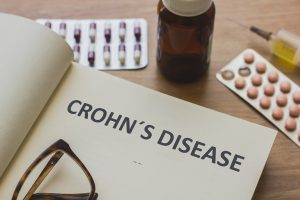 Suffering from Crohn’s can be a truly painful and debilitating experience. It also makes every food choice a significant one because even the slightest disruption to a sensitive digestive system can trigger a furious response.

Diet may play a role in the severity of symptoms people with Crohn’s disease feel. New research is showing a Mediterranean diet may be the best diet to help tame symptoms, largely because it has anti-inflammatory effects and is rather easy to follow.

Both diets reduced symptoms equally. However, researchers believe the Mediterranean diet may be superior because of its accessibility. Unlike SCD, it’s not a restrictive diet that can be difficult to follow.

Restrictive diets are not only difficult to follow, but they can often lack adequate calories or nutrition. The Mediterranean diet is nutritionally dense and offers plenty of options, which makes it both healthy and adherable.

Crohn’s disease is an inflammatory bowel disease involving an overactive immune system and is characterized by symptoms like pain, diarrhea, and chronic inflammation. Flare-ups can sometimes last for days and result in an inability to work or live normally.

According to the U.S. Centers for Disease Control and Prevention, it affects roughly three million people in the United States (along with ulcerative colitis).

A Mediterranean diet may help ease Crohn’s symptoms or control flare-ups because it is made up of largely anti-inflammatory foods. Processed foods, refined grains, and fried fatty foods are not a part of the Mediterranean diet, and all of them are known to cause inflammation.

On the other hand, the Mediterranean diet is made up of nutritionally dense, anti-inflammatory foods that are easy to digest. Fresh vegetables and fruit, healthy fats, fish, and other whole, natural foods are the focal point.

Nutrition is not a substitute for other treatments but adopting a Mediterranean-style diet may help to better control symptoms associated with Crohn’s disease.