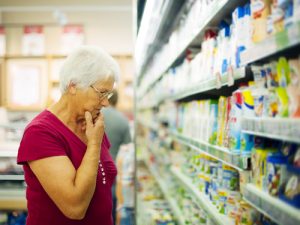 Good old-fashioned milk has been a health beverage of the ages it seems – with good reason. It’s high in vitamins and minerals, and a convenient source of calcium for your bones. Whether you’re drinking it straight, adding it to grain cereals or topping your morning coffee, milk does the body good.

Dairy products have the highest concentration per serving of absorbable calcium, and milk is also fortified with vitamin D, another star nutrient for bone health, researchers say. Not everyone is pro-milk with the increase of lactose-intolerance and the rise of alternative milks like soy, almond and hemp that promise more protein.

Milk is great in moderation

There’s even been some backlash against milk with studies suggesting that too much calcium might increase the risk of hip fractures. Earlier this year, Swedish scientists revealed a major study that found milk may not protect our bones, and consuming more than three glasses a day put study participants at a higher mortality risk, particularly from heart disease. The study tracked 60,000 women for 20 years and 45,000 men for 11 years.

RELATED READING: Why men over 60 are more attractive to women

Now nutritionists are debating how much milk is actually good for you.

To be safe, keep it to a glass a day and include other calcium-rich foods like broccoli and salmon in your diet.

I’ve always been a fan of 2 percent milk, because your body needs some fat to better absorb the vitamins, nutrients and the natural sugar in milk.

When milk gets even better…

But what if I told you there was an even better milk coming to market? One that has 50 percent more protein and calcium, 30 percent less sugar than ordinary milk and no lactose that can cause digestive problems for some people. Does it sound too good to be true?

The world’s largest soft drinks maker, the Coca-Cola Company, has launched its new Fairlife milk in test markets in the United States. It’s a premium, enhanced milk made in partnership with Select Milk Producers dairy co-op, a collective of large dairy producers.

Fairlife is double the price of regular milk.

Economists say the dairy industry could use a boost – and so could Coca-Cola. Milk consumption and soft drink sales are slowing down. People are skipping breakfast or choosing cereal bars or fast-food breakfast sandwiches instead. In fact, statistics show that half of the U.S. population over age 18 doesn’t drink milk at all. Protein and energy drinks, teas, and non-dairy milk alternatives have made a significant dent in the milk market.

Coca-Cola, however, isn’t deterred by slowing milk sales. It’s being smart about taking advantage of the health beverage craze.

But who wants to buy wholesome milk from the king of soda, a carbonated artificial beverage tarnished by links to cancer, obesity and diabetes?

The Fairlife milk has no mention of Coca-Cola on the packaging, of course. The milk is branded as an all-natural enhanced milk from sustainable farmers. It’s sold in bottles that look like juice bottles, making it distinct from the regular milk bags and cartons. Clearly, there’s powerful marketing muscle behind everything the company does. (Coca-Cola has sponsored all 13 seasons of top TV reality show American Idol, so the company knows a thing or two about marketing.)

If Coca-Cola wants to diversify its offerings, at least it’s listening to more health-conscious consumers. The company launched its Simply brand of juice and juice drinks which grew 7 percent in North America last year, despite the decline in the overall fruit beverage segment.

Simply doesn’t have Coca-Cola on the label anywhere either. The brand is marketed as a healthier, all-natural juice with no added sugar or preservatives, giving it some real consumer appeal.

Coca-Cola has also jumped on the energy drink bandwagon by buying a 17 percent stake in Monster, and its new single-pod Honest Tea is coming soon for use in Keurig brewing machines.

Smart, right? Its main rival Pepsi, which owns Frito-Lay, is going the dairy route as well with its Muller yogurt in stores nationwide.

It’s not as though these companies are going to stop selling soda, just like McDonald’s is not about to drop the Big Mac from the menu, but they’re listening to consumers, trying to offer healthier alternatives.

Would you buy your weekly milk for double the price?

But you won’t find Fairlife in my fridge any time soon. Charging double the price for a diet essential makes it out of reach for the average consumer who can’t afford to buy expensive anything.

Coca-Cola has raised the bar on milk, turning it into an elitist superfood. Studies show that people with a wealthier socioeconomic background tend to be healthier overall than people living on a fixed income, like many seniors, who have the most health problems. It won’t be these seniors buying such an expensive milk as a diet staple – and the disparity between healthy people and the less fortunate will only continue to grow.

There will be super-milk and regular, run-of-the-mill milk which has less of the good stuff – less protein and calcium – and more of the sugar that we don’t necessarily need. People may decide to simply consume less milk (the regular, lower-grade stuff) and opt for soda instead!

I’m all for reviving the dairy industry and advocating a daily glass of milk for good health, but turning milk into a superfood for those who can afford it is not the way to go.