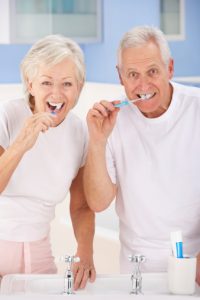 Six minutes a day – three in the morning, and three before bed. That is all the time it takes to maintain a sparkling white smile. These six minutes, however, may prove to be far more important to your future well-being than anyone could have ever imagined.

The Connection between Dementia and Gum Disease

A recent study by a group of British researchers suggests that oral hygiene may play a role in the onset of dementia, specifically Alzheimer’s disease. The study found bacteria linked to gum disease in four out of ten brain tissue samples from Alzheimer’s disease patients. No signs of the bacteria were found in brain tissue samples from people of similar age who had not developed dementia.

Alzheimer’s disease is a common form of dementia that primarily affects the older population, normally over the age of 60. Common symptoms include short-term memory loss, disorientation, and an extreme mood and personality change. The World Health Organization suggests that the number of dementia cases will rise to 115 million by 2050. Alzheimer’s disease, although common, is incurable. While treatments do exist, they simply alleviate symptoms while still unable to remedy the cause.

The study, which was published in the Journal of Alzheimer’s Disease, outlines some of the possible ways these oral bacteria may have reached the brains of dementia patients. According to the team, the bacteria first enters a person’s bloodstream. This may occur through micro-scratches from a toothbrush, or through larger cuts or cavities, such as those caused by tooth removal and other surgeries. From there, the bacteria are free to spread anywhere within the body, including the brain.

While the study did not directly explore the contribution of these bacteria to Alzheimer’s disease or other forms of dementia, the researchers do have some ideas regarding what role these bacteria may play in the onset of dementia. Dr. Sim Singhrao, lead researcher of the study, states that “we are working on the theory that when the brain is repeatedly exposed to bacteria (… ) from our gums, subsequent immune responses may lead to nerve cell death and possibly memory loss.”

According to Dr. Simon Ridley, head of research at Alzheimer’s Research UK, the UK’s top dementia research facility, this study is still in its early stages. Only a small number of samples were tested, and even fewer showed signs of bacteria linked to gum disease in Alzheimer’s patients. Dr. Ridley adds that “we do not know whether the presence of these bacteria in the brain contributes to the disease and further research will be needed to investigate this.”

Previous research has pointed to a connection between oral hygiene and general health. A 2010 New York University study even suggested a link between Alzheimer’s disease and gum inflammation. Dr. Simon Ridley believes that it is important for further studies to look back at dental records and correlate oral hygiene to the occurrence of dementia and Alzheimer’s disease.

As the link between oral hygiene and overall health becomes clearer, it becomes increasingly important for people to be aware of their brushing patterns. It may seem counter-intuitive, but while brushing may be one of the ways that gum disease bacteria enter the bloodstream, it is still of paramount importance to maintain good oral hygiene. This reduces the chance of bacteria developing within the mouth in the first place.

Simple habits – such as brushing and flossing regularly, rinsing thoroughly after meals, and regular dental checks – may go a long way in preserving not only your smile, but perhaps your mental health as well.