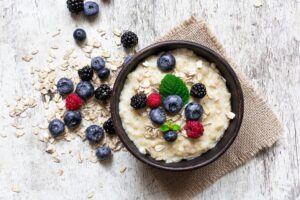 Do you want to get up, feel ready to go, and have that feeling last all day? If the answer is “yes,” keep reading. If not, grab a donut and your favorite spot on the sofa.

A new study has identified three keys to staying energized and alert throughout the day and seems to all-start yesterday.

The headstart to energy may partly depend on how much activity you got the day before. If you went above and beyond your typical activity levels, you might feel more energized and alert the next day.

But that’s only part of the equation. If you slept in a bit, you’re also more likely to experience higher energy levels and alertness during the day, according to this new research. The reason may be that waking up a little bit later than usual may allow people to catch their circadian rhythm on its upswing.

Lastly, the researchers found that a complex carbohydrate-heavy breakfast significantly contributes to daily energy and alertness. So swapping out cereal, pancakes, and pastries for something like steal-cut oats and berries may significantly swing energy levels.

The results, recently published in Nature Communications were based on a study of 833 people who wore activity trackers over two weeks to record sleep patterns and movement.
These findings, however, do not come without some degree of controversy. For example, other work has found daytime energy and alertness to be linked to consistent sleep, protein intake, and other factors. Further, it’s harder to get more exercise and sleep in later every day.

But it does appear that the more activity a person gets in a day, the more energized they are the following one. They also tend to sleep better.

If you want to look for a consistent routine that might help you stay more energized and alert, here are some things that may make a difference: