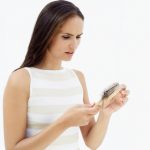 From the time they are little girls gleefully clipping barrettes into pig tails, hair is a major part of most women’s daily grooming routine, their appearance, and often, their general self confidence. So panic, embarrassment and anxiety is a natural reaction when a woman starts to find that she is losing clumps of her hair, which is far more common than you may have realized. While countless products, services and sources of support target the 30 million American men who experience hair loss, female hair loss is rarely ever spoken of, despite the 20 million women who experience it as well.

Hair loss in men has become more acceptable – and even fashionable – in recent years. Many men even shave their heads to be a part of the current trend. Surveys show that bald men are considered more masculine than those who still have a full head of hair. But balding women present a very  different story.

As women get older, it is not uncommon for their hair to become thinner and for bald patches to appear; however, even women in their 20’s and 30’s can develop thinning hair. Statistics show that about 20 million American women are currently struggling with hair loss.

Types of hair loss in women

One of the most common types of hair loss in women is called Androgenetic Alopecia. It is characterized by diffuse thinning throughout the hair. Current research indicates that this type of hair loss is linked to an imbalance of male-to-female hormones, that can lead to a follicle sensitivity in the scalp. Estrogen and testosterone hormones play a major role in your hair. Testosterone can cause hair follicles to stop producing hair, while estrogen does the opposite. In cases of Adrogenetic Alopecia in women, this hormone imbalance can create other health problems outside of hair loss, including ovarian cysts and early menopause.

Dermatologists report that a condition known as Telogen Effluvium (TE) is the second most common cause of hair loss for women. Little research has been conducted on TE, but scientists believe that it causes a change in the number of active hair follicles. Short-term presentations of TE have been linked to hormonal changes that can sometimes follow childbirth, periods of extreme crash dieting or physical trauma. In recent years, some have speculated that this form of hair loss could be linked to poor nutrition and vitamin and mineral deficiencies.

Hair Loss and Getting Older

According to Harvard Medical School, medications are the most common treatment for female hair loss. Generic versions of the well-known Rogaine have been used by women; however, they can cause side effects such as dry scalp and irritation.

Some women are put on hormonal therapy by their doctors, prescribed medications to stop production of the male hormones that cause hair loss. Other women try supplementing their diet with more iron, in response to research that has linked thinning hair to low iron levels (also iron supplementation for hair loss isn’t supported by any strong scientific evidence as of yet).

Another treatment for hair loss is follicle unit transplantation. A narrow strip of scalp is removed and divided into hundreds of small grafts that each contains a few hairs. Each graft is then planted into a slit in the scalp, made by a tiny blade or needle in the section where the hair is missing. The procedure is said to look more natural than the large plugs that were traditionally used many years ago. Some inflammation can occur with follicle unit transplantation, but most people report that cold compresses help soothe the problem.

There are products on the market that claim to be “a miracle cure for baldness,” but beware – there is no such thing as a miracle cure. If you notice that your hair is thinning, instead of spending hundreds of dollars on products with side effects, that have yet to show a high success rate, seek advice from a qualified medical professional first.