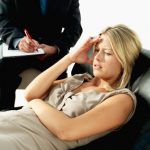 There tends to be somewhat of a scary association when it comes to any kind of therapy that involves electricity or electric volts. When you think of the area of depression or anxiety associated with electricity, the mental image you get could really be a disturbing one to boot. The image appears in many Hollywood movies, of people strapped to giant machines while shocks are sent through their body, in some cases causing damage, and at the very least being considered only positive in an experimental way.

But the truth be told, there are many therapies that are available, that while aren’t commonly talked about or well received by the masses, have been some leaps and bounds and made real headway. And with an issue as dominant as depression or anxiety, there are millions of people who might want to take notice of these technological advances, as the more options that come available the better.

The Depression Therapy That Has Everyone Talking

Depression has long been noticed as a brain health issue that is difficult at best to diagnose, nevermind treat. The difficulties and side effects, as well as the drug interactions between depression and anxiety medications, and other types of medications are well documented. People remain skeptical of the side effects, and the effectiveness and addiction potential as a whole. Experts in the field of mental health say that despite some negative associations in the movies, electroconvulsive therapy (ECT) treatment has developed serious headway. In fact, a current study at JAMA Psychiatry examines a treatment called Transcranial Direct Current Stimulation (tDCS) that is seen to be effective, and could also be a treatment, while electrical, that is rumored not to have the negative side effects of ECT.


The Odd Depression Therapy – What Exactly Does it Do?

This treatment is really quite simple for experts to explain, but the resistance remains static. This depression therapy means stimulating the brain with an electrical current that is rather weak yet still considered by experts in mental and brain function to be overall an effective treatment. The current travels through the front of the brain via electrodes on the top of the head. The “alternative” therapy happens once a day for about 30 minutes at a time. Patients receiving the treatment are awake and cognizant of their surroundings during the entire process.

A Basic Idea of Depression and it’s Treatment

Depression is scary for healthcare practitioners because it remains tricky to diagnose. It is actually considered to be one of the most ignored afflictions in the United States today. It typically sees an onset in early adulthood (before age 30) and symptoms can range heavily from manic and major to mild and difficult to diagnose, never mind treat. Women are almost two times as likely to experience the symptoms associated with depression as men.

RELATED READING: Aging Brain – The Specific Gene That Causes It

Most healthcare practitioners will recommend that if you experience feelings of being lost or hopeless, suicidal thoughts, or extreme fatigue, for up to or longer than 2 weeks you speak to someone about your symptoms right away.