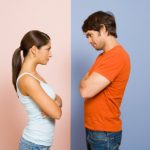 One of the explanations for accelerated aging and a reduced life expectancy amongst men, is that men inherent a set of harmful mutated DNA from their mothers, a process that is often referred to as the ‘Mother’s Curse.” Recently, researchers from Monash University, Australia, and Lancaster University, UK, set out to learn more about the ‘Mother’s Curse’ by studying the mitochondrial DNA of fruit flies. Mitochondrial DNA are found in body cells and they are responsible for converting energy from food into a form of energy that the body cells can actually use.

Life Expectancy, and the Aging Effect

The researchers chose to study fruit flies because the biological processes of fruit flies are similar to that of humans and the short lifespan of fruit flies helps to speed up the investigation process. “All animals (including fruit flies) possess mitochondria, and the tendency for females to outlive males is common to many different species,” explains senior author, Dowling. In addition, a previous study had found that mutated mitochondrial DNA interfere with male fertility, so theorizing that mutated mitochondria DNA might also affect aging, did not seem all that farfetched.


The Research on the Aging Effect

The researchers of the mitochondria/aging study found that there are numerous mutated mitochondria genes which have been passed down to men from their mothers, throughout evolution. These genes only effect males and have absolutely no effect on the aging process or life expectancy of females. Unfortunately, the genes only come from the egg and not the sperm, which means that the process of natural selection cannot screen out the harmful, mutated mitochondrial DNA. “Together, our research shows that the mitochondria are hotspots for mutations affecting male health,” states Dowling.

Dr. Clancy, another lead researcher, adds “We show that Mother’s Curse is much broader in its effects on male life history than previously envisaged, resulting in the build-up of mutations that cause males to age faster, and live shorter lives than females.”  According to Dowling, “What we seek to do now is investigate the genetic mechanisms that males might arm themselves with to nullify the effects of these harmful mutations and remain healthy.”

RELATED READING: If a 103 Year Old Can Become Stronger, Smarter and Feel Younger, Why Can’t You?

This discovery may provide one explanation for the increased life expectancy of women, however, the aging process is complex, and how quickly you age is determined by a variety of additional factors. So whether or not you are a male or a female, there is no reason to play victim to your genes. You can easily slow down the aging process and look and feel younger by living a healthy lifestyle. If you want to increase your life expectancy than reduce or eliminate processed foods and consume only foods that your great grandmother would actually recognize as food (aka whole foods). You should also be sure to exercise regularly, and address any underlying emotional issues, because negative emotions have a profound effect on your health and they increase your susceptibility to disease.