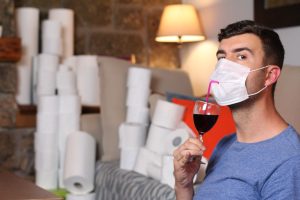 There is plenty of data to show how much. Earlier reports suggested that U.S. alcohol sales rose 54 percent in the pandemic’s first week alone. But what does that look like from a health perspective?

Of course, there are all kinds of negative health implications from heavy alcohol consumption. But one study has shown that early-pandemic drinking leads to a substantial jump in hospitalizations for life-threatening alcoholic hepatitis.

Researchers at the Henry Ford Health System in Detroit decided to compare alcoholic hepatitis hospital admissions at their center between May and September 2020 and the same months from the previous four years (2016, 2017, 2018, 2019).

Alcoholic hepatitis is a liver disease caused by heavy drinking. When hospitalization is required, a liver transplant is often needed and is the only treatment for survival.

More than 100,000 people are hospitalized for the condition each year, and the average 28-day death rate is 26 percent.

In the five months the researchers looked at from the early pandemic, they found that average hospitalizations jumped by 50 percent compared to the previous four years. The average was just over 18 per month, up from about 12.

The early warning signs of the condition include jaundice, yellowing of skin or eyes, and a build-up of fluid that causes swelling in the lower extremities and abdomen.

If you started drinking more and have continued during the course of the pandemic, trying to get it under control, into a moderate range, is recommended.

How can you get down to one or two drinks per day if you’re struggling? Try cutting back one drink, per day, at a time. You can also consider trying a wide variety of non-alcoholic beer, wine, and spirits.

Setting weekly limits is a good idea, too. You can also look for other activities to fill your time and keep your hands busy.

Too much alcohol can be life-threatening. Remember this fact and do your best to curb dangerous drinking habits.