Home » Health News » The Pandemic Caused People 50+ to Drink More. Here’s Why That Can Be a Problem 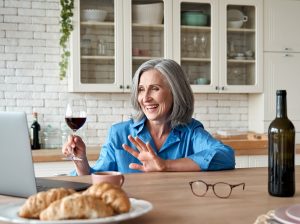 A new survey is showing that middle-aged and older Americans made a heavy turn to alcohol during the height of the pandemic. And while the occasional drink might be good for your health, too much alcohol can pose serious health risks.

More than 2,000 adults aged 50 to 80 were questioned in late January when COVID-19 was at its worst and older adults had just become eligible for vaccination.

Roughly 14 percent who drank alcohol said that their consumption increased over the first 10 months of the pandemic. The rate was even higher among those who routinely drank.

Between one third and one-half of regular drinkers who said they drink alcohol to improve their mood, relax, or cope with boredom, stress, or pain increased intake. Finally, drinking also went up among those who said they felt lonely or depressed.

A person’s ability to process alcohol changes with age. An amount that they consumed in the past, for example, may affect them differently now. It could raise the risk for a fall by affecting balance.

Aside from potentially affecting immune and mental health, high levels of alcohol consumption can also impact your heart and liver, to vital organs to survival and quality of life.

The good news is that by scaling back on drinking you might be able to reduce some if its physical effects. Your liver, for example, is a very resilient organ that can repair itself if given the space to do so.

Limiting alcohol and processed food intake can help your liver get back to better health. Eating a nutrient-rich diet, and specific foods like broccoli may offer added protection.

Drinking is not inherently bad, and the occasional drink or two can be good for mental health and encourage relaxation – especially when you’re doing it in the company of some vaccinated friends. But it can be a slippery slope.

Pay attention to how much you’re drinking and find ways to scale it back, if necessary.