Home » Health News » The Pandemic, Alcohol, and Your Liver 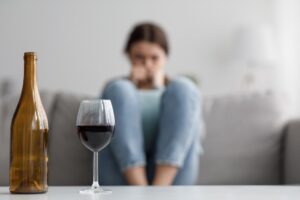 A recently published government report suggests that deaths caused by alcohol took off between 2019 and 2020 as the first wave of the pandemic rocked the country.

Stress, boredom, and other factors likely played a role as people around the nation tried to grapple with the unknowns of COVID-19, lockdowns, and social isolation.

The reports showed that the alcohol-induced death rate skyrocketed by 26 percent during that period, killing more than 49,000, according to the Centers for Disease Control and Prevention (CDC). That number works out to 13 deaths for every 100,000 people; the 2019 death rate was 10.4 per 100,000.

History has shown that people typically drink more during large-scale traumatic effects. Small studies have shown that roughly a quarter of the population increased their drinking to help cope with stress. Many who drink to cope with stress develop an alcohol disorder.

More than half of the 2020 deaths caused by alcohol were from alcoholic liver disease, while other causes included mental health disorders related to alcohol use.

The CDC also suggested that the numbers would have tripled if the analysis had also included deaths that could be attributed to excess drinking rather than directly causing it.

Heart disease, genetic mutations, and accidents – like car crashes – can all be attributed to excess alcohol use.

Alcohol adds wear and tear to your body over time, and consistently high consumption levels can expedite the effects. It can easily become so problematic because of its acceptance and accessibility in society.

Unlike other drugs, alcohol is legally available everywhere. There are commercials for it on television, and it is a major sponsor of community events.

Because it is so prevalent, misuse or abuse can easily be missed.

If you’re drinking in excess of moderation, meaning more than one standard-size drink per day for women and two for men, you may want to find ways to curb consumption.

You can try non-alcoholic options of beer, wine, and spirits. Drinking soda water with a lime in between drinks may slow consumption, as well. Taking yourself out of situations where there is pressure to drink can also help.

Of course, going at it alone can be difficult. If you’re struggling to drink less, talk to a professional about how to help.