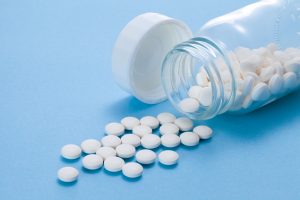 There has been a lot of talk for and against the use of aspirin over the years. You have likely heard about an aspirin a day recommended for prevention of heart attack and, of course, for proven pain relief.

But could the popular painkiller have a role in cancer prevention as well?

A new study indicates that long-term aspirin therapy may provide a strategy to protect against cancers of the digestive tract. The research findings, published in Annals of Oncology, showed that taking aspirin, also known as acetlylsalicylic acid or ASA, in daily low doses could significantly reduce the risk of developing stomach, bowel and esophageal cancers.

A research team from the Center for Cancer Prevention at the Queen Mary University of London performed a meta-analysis of previous studies investigating the benefits and harms of aspirin use.

RELATED READING: Why it’s so important to keep your cholesterol in check

According to the published findings in the Annals of Oncology, the effects of aspirin on cancer didn’t take effect until three years into treatment, but the benefits lasted when aspirin was used long-term. There was no connection when dosage was examined; individuals using low and standard dosages saw the same benefits. On the other hand, researchers are quick to mention there is no information to prove high doses mean a greater benefit in cancer risk reduction.

Weighing the risks and benefits

The results add to the list of demonstrated benefits of daily aspirin therapy, which also include its help as an antiplatelet for those at high risk of stroke or heart attack. In prior studies, aspirin has shown potential preventative effects against ovarian, prostate and breast cancers, as well as some skin cancers, the American Cancer Society reports.

Study authors acknowledge there is a well-known risk factor of aspirin – excess internal bleeding. But they say the benefits appear to outweigh the risk as long as the correct dosage isn’t exceeded. Over a 15-year period, individuals in the study group saw a 4 percent reduction in all deaths.

Opinions on long-term aspirin use

The researchers of this meta-analysis also found that long-term aspirin use did increase the risk of digestive-tract bleeding, but the effect is only likely to be life-threatening in about 5 percent of people.

“The risk of bleeding depends on a number of known factors which people need to be aware of before starting regular aspirin, and it would be advisable to consult with a doctor before embarking on daily medication,” study lead Prof. Jack Cuzick told Medical News Today.

Cuzick also says aspirin use is the easiest cancer prevention tactic to implement so far, but that doesn’t mean people should take too much or continue poor lifestyle habits. That little pill won’t wave away the harm of smoking, drinking and obesity – still major contributors to cancer risk. A healthy lifestyle, as I tell all my patients, makes the most difference in staving off disease and keeping away those aches and pains.

No public health organizations, including the American Cancer Society, recommend taking aspirin as a sole preventative measure for cancer or any other illness.