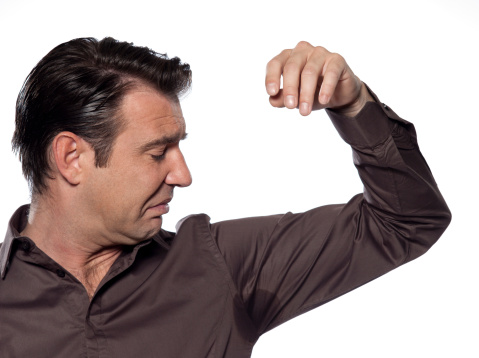 Most of us have heard the terms “young and fresh” and “old and stale”, but clearly these old adages do not apply when it comes to body scent. A new study shows that you don’t have to be young to smell good. In fact, it turns out the elderly have a less intense body odour then younger people do.

A study, published in the journal PLoS One, looks at humans’ ability to judge age based on smell alone. Forty-one volunteers between the ages of 20 and 95 spent 5 nights sleeping in T-shirts with nursing pads sewn into the armpits. Before bed they all showered with odour free soap and laundered their linens in odour free detergent. Once the 5 nights were over, researchers took the pads out of the shirts and put them in individual jars. Another group of volunteers then went to work assessing the odours by smelling the inside of the jars. They had to rate them in terms of intensity and pleasantness or unpleasantness. The surprising results…the 75-95 year olds were judged to be less intense and more pleasant than the young and middle aged jars. The most unpleasant came from the 45 to 55 year-old men’s jars.

What Smell Has To Do With Your Health

The authors of the study say the results seem to support the long standing concept of “old people odour”; the notion that old people have a certain smell. What is surprising though is that this common smell is not nearly as repugnant as people normally describe. The researchers suggest that the thought that old people smell bad has more to do with a “negative perception” towards old age, rather than a true reflection of the odour.

The report published in PLoS One doesn’t mean that all elderly people come up smelling like roses.  According to the Social Issues Research Centre, everyone has a certain preference in terms of odour so what smells good to one person may not smell all that great to another. They also point out that sense of smell can be impacted by ones health. If you have damage that is classified as physical or mental it can impair your ability to smell properly. If you were for instance a judge in this latest study and suffered from migraines, depression or anorexia, studies show that your ability to smell accurately could be skewed. Like damage to taste buds, damage to our sense of smell can be very mild.

So how is it that we smell in the first place? The simple way to explain it is that body odour is due to an interaction between skin gland secretions and bacteria on our skin. As we age, the activities of our skin glands change so this could account for the change in the way we smell.

What Your Genes Have To Do With Your Smell

No matter how we smell or why we smell the way we do, the findings reported in PLoS One have made for interesting water cooler conversation. A number of media outlets have picked up on the story and scientists believe this will fuel further research into the area of sense of smell.