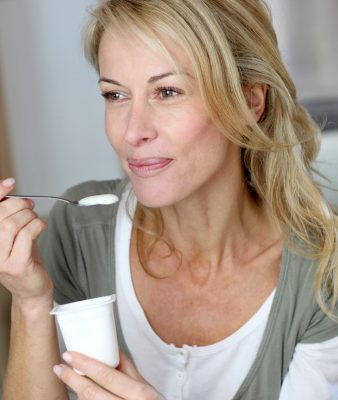 If regularly eating probiotic-infused yogurt could improve your brain function and boost your mood, you might never turn down a cup of yogurt again. Researchers at UCLA have discovered that brain foods really do exist, with probiotic yogurt being one of the most easily accessible brain foods available on the market.  This breakthrough research study has provided the first hard evidence that bacteria in the gut can have a major impact on the human brain.

Find Out How to Boost Your Memory, Concentration, Brain Function and Your Mood Here.

The researchers set out to see if the consumption of fermented milk products with probiotics for four weeks could alter intrinsic activity in the brain or affect emotional responses in healthy women.  The study included 36 healthy women between the ages of 18 and 55.  The women were randomly assigned to one of three groups. The first group ate a specific yogurt that contained a variety of probiotics (Bifidobacterium animalis subsp Lactis, Streptococcus thermophiles, Lactobacillus bulgaricus, and Lactococcus lactis subsp Lactis) twice a day for four weeks.  The second group consumed a dairy product that looked and tasted like yogurt, but didn’t contain any probiotics.  The third group did not consume an assigned product. Functional magnetic resonance imaging was used before and after the four week intervention period to investigate the brain’s activity in both a resting state and in response to emotional attention tasks.

The results of the study revealed that women who consumed probiotic-fortified yogurt showed decreased activity in the insula and in the somatosensory cortex of the brain – areas associated with internal body sensations, like the ones in the gut – during emotional attention tasks. Additionally, it was found that they also had decreased activity in a widespread network of the brain including areas involved in emotion, cognition and sensation, whereas the women in the other two groups showed stable activity or an increase in activity in this network during the same tasks. In addition, during the resting brain scans, women who consumed probiotic yogurt showed greater connectivity between the periaqueductal grey matter in the midbrain and areas associated with cognition in the prefrontal cortex.  On the other hand, women who consumed a yogurt-like product with no probiotics showed greater connectivity between the periaqueductal grey matter and areas related to emotion and sensation.  The women who didn’t consume a product at all showed results in between the two previously mentioned.   The results from this research show that bacteria consumed via the yogurt did have a significant effect on brain activity.

Brain Foods and Implications for the Medical Field

The UCLA researchers hope to determine which chemicals produced by bacteria in the gut are responsible for sending signals to the brain. They also hope to investigate whether individuals suffering from gastrointestinal symptoms, such as bloating and gas, have changes in their symptoms that correlate with their individual brain responses.

It has long been known that the brain sends signals to the gut, which is one of the reasons that stress and anxiety can lead to gastrointestinal complaints. However, now researchers are aware that the signalling works the other way as well, new innovative treatments, including dietary and drug interventions now have the potential to be developed to help improve brain function in some individuals. Additionally, once the mechanisms by which the gut bacteria and the brain are fully understood, researchers may be able to alter gut contents to treat chronic, and/or neurological diseases that are often debilitating.

While many people eat yogurt on a regular basis, they may actually be experiencing additional health benefits without even knowing it. If you don’t currently consume healthy brain foods such as probiotic yogurt, you may want to consider adding it into your diet to reap the brain benefits.

To learn more about how to boost your memory, concentration, brain function and your mood, click here.