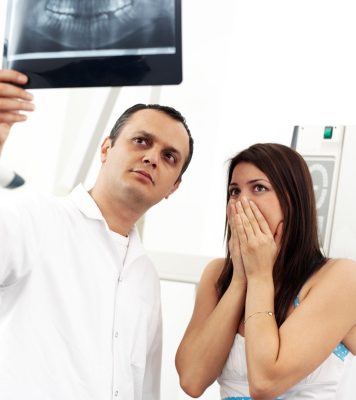 1 in 8 women will be diagnosed with breast cancer at some point in their life, according to www.breastcancer.org. Women have long been advised that having a mammogram routinely will help to detect breast cancer early which will increase the chance of survival.

However, controversy exists around mammograms, especially when performed on young women.  Research has shown that young women who have a strong family history of breast cancer may actually be at an increased breast cancer risk when they undergo diagnostic imaging, including mammograms at an early age.

What is Breast Cancer?

Breast Cancer and the Role of Mammograms

A mammogram is an x-ray of the breast and the National Cancer Institute recommends that women over the age of 40 have a mammogram every 1-2 years to monitor for breast cancer.  The National Cancer Institute recommends that if a woman has an increased breast cancer risk, either because she has a family history of breast cancer or she has a mutation in either BRCA1 or BRCA2, she have mammogram screening before the age of 40.  There are two different types of mammograms that are performed:

A project called GEN-RAD-RISK looked at over 1,900 women who had either BRCA1 (65% of participants) or BRCA2 (25% of participants) mutations and the effect that radiation exposure to their chest had on their breast cancer risk. The participants reported their lifetime exposure to various diagnostic imaging procedures including fluoroscopy, radiographs (x-rays), CT scans of the shoulders and/or chest, mammography and bone scans of the shoulders and/or chest.  The results showed that breast cancer risk increased with increased radiation exposure, showing that the effect of radiation is cumulative.  Radiation exposure before the age of 20 was shown to have more of an effect than exposure in the 30’s. Almost half of all of the participants had an x-ray before the age of 40 and approximately 33% had a mammogram before the age of 40.

RELATED READING: What Breast Size Can Tell You About Cancer Risk

The findings showed that exposure to any sort of radiation before the age of 30 increased breast cancer risk by 90% for women who had BRCA1 or BRCA2 gene mutations. Additionally, a history of mammogram before the age of 30, increased cancer risk by 43% in women who had BRCA1 or BRCA2 mutations.  The results of this research give further support for the use of MRI (magnetic resonance imaging) or other types of non-ionizing radiation to screen for breast cancer as opposed to mammograms in young women who are carriers of the BRCA1 or BRCA2 gene mutations.