Home » Immune System » Allergies » The Link Between Allergies and Exhaustion 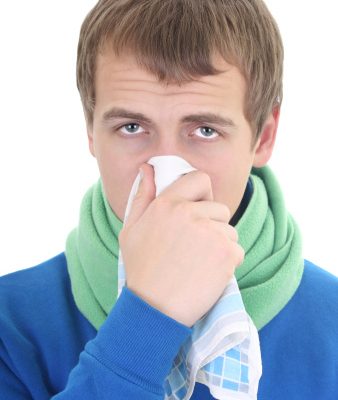 According to the American Academy of Allergy, Asthma and Immunology, “allergies are among the most common chronic conditions worldwide.” They can make you miserable, and typically trigger symptoms in your nose, throat, lungs, sinuses and ears, on your skin or the lining of your stomach.

In his article “Molds, Mites, and Pollens: Common Causes of Allergic Fatigue,” Ronald Hoffman, M.D., says “over twenty million Americans suffer from hay fever. About ten million are victims of asthma, and another eleven million suffer from skin disorders like eczema, hives, and rashes. Many allergic individuals don’t realize that their unusual fatigue, irritability, and mood swings may be due to seasonal allergic reactions.”

In an interview aired by KSEE24 News, allergist Talal Nsouli, M.D., said, “It’s a disaster when patients are afflicted with these types immune system afflictions. The allergies are affecting their energy; they cannot wake up in the morning; they are late to work; it affects their mood; it causes irritability.”

Nsouli studied 98 patients suffering from seasonal and environmental allergies; 82 per cent of them said they experienced “extreme fatigue and lethargy.” Nsouli says “this is more evidence that when allergens enter the body, chemicals like histamines can actually slow down brain function. So people will not only feel fatigue, they can feel irritable, depressed, and even have symptoms similar to attention deficit disorder. Other studies have even linked seasonal allergies to chronic fatigue syndrome.”

A 2006 study published by the American Medical Association reports that allergic rhinitis (AR) “has been shown to impair quality of life.” The study revealed that “poorly controlled symptoms of AR may also contribute to sleep loss or disturbance, resultant daytime fatigue, and decreased overall cognitive functioning.”

Another study led by Timothy Craig, D.O., associate professor of medicine at Penn State’s College of Medicine, found that fatigue experienced by people with perennial allergies may be the result of nasal congestion and associated sleep fragmentation.

Steven V. Park, M.D., author of Sleep, Interrupted, says “when your nose gets stuffy, your tongue starts to fall back, creating a vacuum effect in your throat, so you keep waking up, because you can’t breathe.”

Besides allergies themselves, some over-the-counter allergy medications can cause extreme fatigue and grogginess.

Due to its sedating properties, the antihistamine diphenhydramine hydrochloride, for instance, is also sold as a non-prescription sleep aid and is an ingredient in some night-time cold and pain medications.

When taking sedating antihistamines, studies have shown you may experience greater difficulty functioning than if you were under the influence of alcohol. This can be hard on your immune system.

Alternately, the decongestant pseudoephedrine, found in many allergy formulations, is a stimulant that may cause insomnia. After a night of tossing and turning who wouldn’t be exhausted the next day? This could also wreak havoc on your immune system, and make you sick and tired.

Craig says people who can breathe easier at night, “have a less interrupted sleep pattern” and “an improved quality of life.”
He found that study subjects who were treated with a topical nasal corticosteroid experienced “improved night-time sleep and reduced daytime fatigue,” and recommends nasal steroids “as the first line of medical therapy in adults having AR with nasal congestion.”
Hoffman recommends taking extra vitamin C after an allergic reaction, as it is a natural antihistamine.

Melissa Pynnonen, M.D., Co-Director of the Michigan Sinus Center, says “nasal irrigation can be considered a first-line treatment for common nasal and sinus symptoms, [as] it’s often more effective than medications or can be used in addition to traditional medication.”

If you are suffering from allergies, but are unsure of the cause, an allergist can help.

Spring allergies? Natural solution for dry eyes
We all love the feeling of warmer weather and the promise of summer months ahead, but sometimes the side effects of seasonal changes may not make it less than enjoyable. Spring is a time for renewal and so the grass gets greener, the trees and flowers start to blossom and the scenery of white and grey fades away….Read More

Best Fix For Allergies This Season…
Itchy eyes and runny nose got you down?
For some, the arrival of spring (belated, though it’s been this year) is met with dread because all those blooming buds and leaves means one thing: Allergy season is here.
The trick is not to let stress get the better of you and your nasal passages. A new study has … Read More