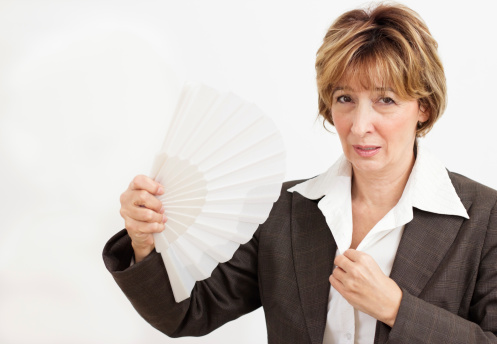 For literally thousands of years, people living along the Mediterranean coast have consumed diets rich in plant-based foods without giving them much thought.  Over the last decade, though, countless studies have shown that following a Mediterranean diet has the potential to protect us against the development of heart disease, certain cancers, particular neurological problems, diabetes, and obesity. According to a recent study, Australian researchers now believe that a Mediterranean diet can also help with hot flashes.

A hot flash is a short sensation of heat that can come at anytime during the menopause stage in a woman’s life. It can include sweats and even be accompanied by a red, flushed looking face. Some women experience a more rapid heart rate followed by chills. Night sweats can occur with hot flashes as well and often interfere with sleep. It can be a difficult and frustrating time in a woman’s life.

Mediterranean diet focuses primarily on plant-based foods like fruits and vegetables, whole grains, legumes and nuts. Butter is normally replaced with healthier fats such as olive oil. Very little salt is used to flavor food, since various herbs and spices are added instead. Red meat is kept to a minimum; however, fish and lean poultry are consumed two or three times a week.

Fruits and vegetables are known to be packed full of vitamins, minerals and antioxidants. These fresh foods included in Mediterranean diets have also been associated with a lower level of bad cholesterol; the type of cholesterol that is likely to build up deposits in our arteries and potentially contribute to cardiovascular diseases.

How a Mediterranean Diet Can Help With Hot Flashes

The study conducted in Australia through the University of Queensland could not specify exactly which foods prevent the flashes, but the researchers say that it is possible that low-fat diets help stabilize estrogen thus easing hot flashes. Eating a Mediterranean diet could also place blood sugar within a normal range, keeping symptoms of menopause to a minimum.

The authors of the study admit that not enough research has been done to start offering recommendations to women with menopause; however, they do remind people that a lot of research already exists to support that a Mediterranean-style diet has many health benefits. They say for this reason, adopting it at any point in life is a good idea.

While research continues in the connections between food and flashes, there are other steps women can take to lessen the effects of menopause. It may not be possible to completely eliminate hot flashes during menopause, but there are triggers that can cause them to occur more frequently. Doctors recommend avoiding the following during menopause:

Some women say keeping their room cool at night and using a fan during the day is good is helpful with hot flashes.  Wearing light layers of clothing with natural fibers like cotton will make you more comfortable should a hot flash suddenly come on.