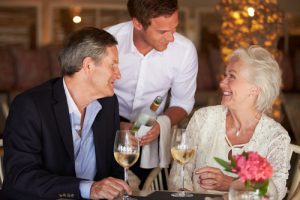 Eating at a restaurant is supposed to be fun, whether it’s a fancy suit-and-tie kind of place or a diner for a clubhouse sandwich and coffee. It’s a way to get out of the house and relax with good conversation.

Sure, you spend a little more for the ambiance, but someone else does the clean-up and you get a chance to be waited on. Who doesn’t like that?

But what if you knew there was a dark and dirty side to those meals you have been enjoying while out on the town? Something that could make you seriously ill…

Would you be more inclined to prepare your own food at home, after all?

Here are three of the most common places your restaurant of choice might be hiding a nasty secret:

Think about it, so many people are touching the restaurant menus every day, yet most of the time they aren’t disinfected. A 2013 study in the Journal of Environmental Health showed that laminate menus carry loads of bacteria, including E. coli bacteria.

In fact, the bacteria count on a menu sits at 74,000 per square inch. That’s more than the toilet seat (1,201 bacteria per square inch)! The irony is the laminate covers are waterproof, making them much easier to disinfect; it could be such an easy fix.

The study showed significantly less bacteria on the paper menus, so if you can, opt for those, don’t just blindly trust that disinfecting is happening between pairs of hands.

Germs can get into your body several different ways. They often travel through your eyes, ears or the mucus membranes of your lips and nose, so handling a menu and then absently touching your face can spell trouble.

Germs can also transmit from the infected person by sneezing or coughing. The Centers for Disease Control and Prevention (CDC) has said germs are especially dangerous because people are building a resistance to antibiotic medications used to treat the infections germs cause. Eventually, the drugs may stop working as the infections become more aggressive.

It isn’t uncommon to see a lemon wedge in your drink, or maybe you request a glass of water with lemon or lime on the side. As it turns out, those lemons have come in contact with an awful lot of germs and bacteria. Another study published in the Journal of Environmental Health in 2007 analyzed 76 lemons from 21 different restaurants across the United States. The stomach-churning results showed an entire 70 percent of the lemons were contaminated with E. coli bacteria.

But what might be even worse is the study researchers could only guess where the bacteria came from. The most likely explanation would be the lemon coming into contact with raw meat or fecal matter that had been transferred from fingertips to the fruit. With this information in mind, it might be best skip the lemon!

RELATED READING: Don’t put it in your mouth! Dangers lurking on your toothbrush

One of the very few things that fast food chains might have to brag about is the sanitary way they distribute their condiments, as they tend to come in individual packets. Beyond your fast food choices, the average restaurant doesn’t operate the same way.

Have you looked at the tabletop lately? There’s the standard glass or plastic ketchup bottle taking up residence. So many people touch the ketchup bottle, but they are rarely wiped down in the hustle of trying to clear tables for the next customers. Not only this, but for an additional “ick” factor, that congealed gunk on the bottom of those bottles doesn’t look that sanitary. If that telltale gunk is there, it’s a pretty safe bet the bottle hasn’t been cleaned in a long time.

I’m not saying you need to stop dining out, but a little awareness about the general cleanliness of where you are choosing to eat is always a good idea. My rule of thumb: Make sure to wash your hands thoroughly before you eat and after you leave.

Sometimes you can’t trust that the restaurant you are eating at cares as much about transferring germs as you do!