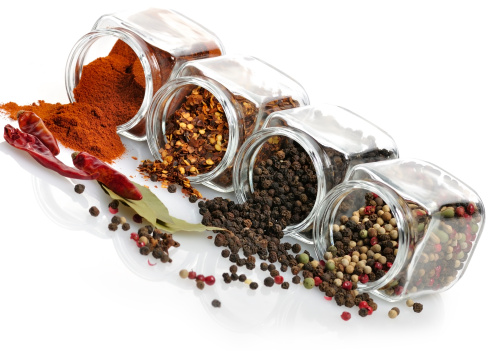 India has been known, throughout history, as the home of spices. These condiments have sparked wars between kings, and fueled the discovery of entire continents. Today, these keepers of flavor maintain their regal status in the fields of medicine and nutrition, exhibiting incredible medicinal properties in addition to their savory seasoning.

However, unfortunately, spice savants must now beware: recent methods of spice cultivation and transportation have rendered spices with some additional, unexpected – and quite unhealthy – properties, resulting in a mass rise of illness and infection.

Bacteria in your Spices?

The United States Food and Drug administration recently conducted a study that revealed a frightening truth about the spices found in almost every kitchen in the Western World. Salmonella bacteria have contaminated huge amounts of these spices.

These bacteria cause a gastrointestinal infection that can last for up to four days. Hospitalizations and death are rare, but not unheard of. Children and the elderly are the most likely to get infected by these bacteria as well, since they tend to have weaker immune systems than adults.

In a study of 20,000 samples, 9 percent of the spices shipped from India showed signs of contamination. Spices shipped from Mexico were more heavily contaminated at 14 percent, but the sheer volume of Indian spices consumed by American citizens makes the problem in India far more worrisome. In 2012 alone, India exported nearly 326,000 metric tons of spices to the U.S.

Agriculture officials in India are taking this issue very seriously. As the word’s largest producer and exporter of spices, the country feels responsible to provide safe products to its various markets, and bacterial contamination may well be the undoing of their entire spice export business.

The problem with bacteria passed through spices is that they are hard to trace and identify. Some are used regularly, but others sit on racks for long periods of time before being used. This means that linking health problems to a particular batch, and then to the origin, is nearly impossible.

In India, officials have stated that exported spices are usually treated in order to kill any bacteria. However, a salmonella outbreak in 2010, that affected over 250 people in 44 American states, was recently linked to a container that had undergone this said treatment and had been certified as safe.

The FDA has set up offices in New Delhi in an effort to wage war on the salmonella bacteria. They have the power to deny any shipment that inspires any suspicion in regards to health standards.

In Asian countries, most spices are cooked as a part of the meal. In the west, however, raw spices like pepper are added directly onto food. To avoid being infected by bacteria that may have contaminated your spices, it is advisable season your foods while cooking, so that the spices are exposed to heat up to at least 71 degrees Celsius.

According to the FDA, spices derived from fruits, leaves and seeds, such as basil, oregano, coriander, sesame seeds, curry powder, and cumin are more likely to be contaminated by salmonella bacteria. As a rule of thumb, spices produced from barks and flowers are far less likely to be hosting the bacteria.

The FDA also warns that spices that are pre-cracked or ground are more likely to be contaminated. Taking a little extra effort to grind spices at home can go a long way in keeping salmonella bacteria away from you and your children.

In the U.S., salmonella bacteria infects nearly 1.2 million people every year. If you are concerned about your health, or have a weak immune system, it may be best to avoid eating raw spices altogether.

Agriculture officials across the globe will soon unite to find methods of keeping the salmonella bacteria at bay. Farmers in India have already begun changing their methods to lower the risk of contamination. Until the issue is controlled at the source, however, precautions at home are the best defense against the bacteria. Variety may be the spice of life, but for now, heating spices to rid them of harmful bacteria may be the approach to a healthy life instead.