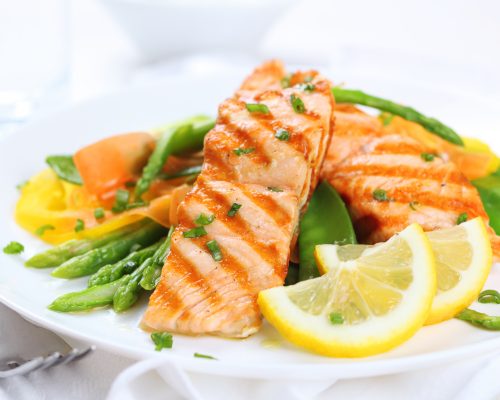 Barbecuing is a great way to maintain flavor and enjoy delicious meats such as chicken, pork or steak. It’s important to get in your protein for overall health, but don’t just stick to the the barbecue staples and try grilling up some fish.

Another reason I’d recommend fish as a healthy alternative to grilling up a steak or chicken breast. You might already know there is a great deal of evidence in favor of the brain-health benefits of seafood. But there is one benefit you might not know about.

New research published in the American Journal of Preventive Medicine indicates that eating fish at least once a week is healthy for your brain, outside of the omega 3 fatty acid content. Fish consumption is just one lifestyle factor that could help your brain stay healthy as you age, working to stave off dementia.


Fatty acids to boost your brainpower

Studies have shown that omega 3 fatty acids have an antioxidant effect that is related to the health of the brain. We get omega 3s in our diet through fish, nuts, seeds, some oils and fortified foods. The study researchers wanted to investigate this potential link between diet and brain health, so they looked at data from 260 participants in the Cardiovascular Health Study, a decade-long study that measured risk factors for heart disease in seniors. The participants provided information on their diet and had MRI (magnetic resonance imaging) scans to confirm their brain health. All participants were considered to be of normal cognitive health.

The diet information provided by participants included data on how much fish they consumed and how it was prepared. Participants who ate baked or broiled fish at least once weekly had a greater volume of grey matter in the parts of the brain associated with memory and cognition. More grey matter is a good thing! Fish has more omega 3 fatty acids when it is broiled or baked than when it is fried.

What the researchers didn’t find was any link between omega 3 blood levels and differences in the brain, which they considered surprising. Perhaps just as surprising was that the people who ate baked or broiled fish regularly were more likely to have a college education than study participants who did not often include fish in their diets.

RELATED READING: When you’re afraid your memory is declining…

Still, the findings show that choices we make regarding our diet and lifestyle have the potential to impact our brain health later in life. Dementia could take a significant toll on our health care system in the coming years. It’s estimated that 80 million people will have dementia by 2040, study researcher Dr. James Becker told Medical News Today. Alzheimer’s disease, the most common type of dementia, currently affects more than five million Americans and is one of the leading causes of death in the country, according to the Alzheimer’s Association.

Becker says this information suggests that lifestyle factors, in this case eating fish, can contribute to structural changes in the brain. We want to keep our brain structure strong and those connections firing.

If you eat seafood, look at the recommendations for consumption that best suit you and your lifestyle. The Environmental Protection Agency (EPA) recommends avoiding certain species like shark and swordfish because the high levels of mercury in these fish can be damaging to the nervous system.

But wild salmon, snapper, trout? These are delicious on the grill, baked or broiled.