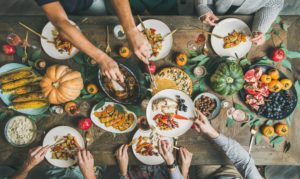 The holiday season has touched down in North America. Canadians just celebrated Thanksgiving—and still might be picking at leftovers—and Americans will follow in a few short weeks. The many will do it all again for Christmas.

As countless families are sharing the same meal, even more people will be carving out a corner to take a post-dinner nap. “It’s the turkey!” they say, but is it?

Yes, turkey contains tryptophan, an amino acid that stimulates serotonin production. Serotonin promotes sleep by manufacturing melatonin, the sleep hormone. Thing is, turkey has no more tryptophan than eggs, beef, chicken, or fish, and you don’t see throngs of people passing out after a salmon salad.

Tryptophan also has a hard time crossing the blood/brain barrier and doesn’t lead to the post-turkey crash without some help. What causes post-fowl fatigue is what you eat with it: cranberry sauce, stuffing, potato, and pie. Insulin—the hormone released by the pancreas to carry sugar to your tissue—increases the effect of tryptophan. So the carb-heavy sides, sauces, and desserts most people load onto their plates at Thanksgiving are really what’s making you drowsy.

Of course, most people eat more at Thanksgiving than normal. A stuffed tummy also encourages drowsiness as your stomach puts increased demands on the blood supply to aid in digestion. With less blood in the brain, it’s harder to stay awake.

If you don’t want to be snoring up a storm on the sofa following dinner, there are a few things you can do. The first is to exercise some portion control. Having a little extra for leftovers or to take home lets you enjoy the season a little longer. Have a normal-sized plate, eat it slowly, and see how you feel 20 minutes later.

Going easy on the carb-heavy sides is another strategy. Instead of smothering your turkey in cranberry, just have a small spoonful. Choose either stuffing or potato, but double up on green veggies. Doing so can prevent the insulin spike that bolsters tryptophan. If you can resist the apple pie, opt for a fresh apple instead.

You can stay awake this year if you want to—it’s not Turkey!