Home » Health News » That Saltshaker Could Shave Years off Your Life 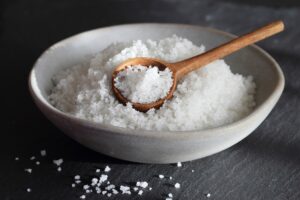 Do you reach for the saltshaker the minute you sit down for a meal? You could be seasoning your way to a shorter life if you do.

Instead, try sitting down and tasting your food. If it isn’t lacking flavor, don’t add any. Maybe reach for herbs, spices, or a little lemon juice if it is.

Results from a recent study published in the European Heart Journal found that salt lovers will generally lose about two years from their life expectancy at 50 compared to those who never add it.

Health experts have long advised limiting sodium in the diet, largely as a way to help control blood pressure. High sodium intake can lead to higher blood pressure. This new study, however, is the first to examine how sodium may impact longevity.

The study included more than 501,000 adults participating in the UK Biobank Study. When they were recruited between 2006 and 2010, they answered questions about diet and lifestyle habits.

More than 18,000 participants died prematurely, which researchers defined as age 75, over nine years.

Of course, there could be other differences between the two groups. People who do not eat a lot of salt may have healthier habits, for example.

However, the researchers accounted for many lifestyle differences and overall health.

Among men, salt shaved off about two years. Women lost about 1.5 from high salt intake.

Salt can be easily replaced with other spices and seasonings. Eating more foods that don’t typically require salt can also be worthwhile – things like fruit, vegetables, whole grains, and nuts.