Home » Health News » Testosterone: What It Does and Doesn’t Do 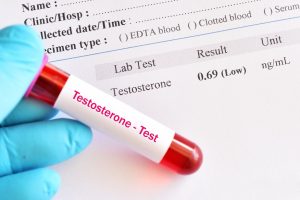 What comes to mind when you think of testosterone? Aggression, machismo, road rage, or dads fighting at their children’s sports games? Maybe a little promiscuity?

But testosterone’s role in that stuff is a myth. Or maybe even an excuse. Testosterone doesn’t make men act ignorant. On the other hand, it’s actually a valuable hormone for both men and women.

Although it’s known as the most important male sex hormone, and it is, it plays an essential role in health and disease risk for both men and women.

In men, it is essential in:

In women, testosterone can impact ovarian function, bone strength, and libido. It’s found in significantly lower amounts in women, yet it is still essential to health and functionality.

In men, having too much testosterone is very uncommon. That said, the “normal” range is very wide and can be controversial.

Testosterone drops naturally in men. But unlike women going through menopause, it is not a significant and relatively rapid drop. Instead, testosterone gradually drops by 1 to 2 percent per year.

Roughly 1/3 of men over age 45 may have lower testosterone levels than they once did, although it still might fall in the “normal” range. But that doesn’t mean they won’t feel it. With testosterone, things seem to be relative.

Natural ways to maintain testosterone or potentially increase it include weight training, a healthy diet, and an active lifestyle. If those things don’t help and it’s determined that low testosterone is impacting health, testosterone replacement therapy (TRT) is an option for some.