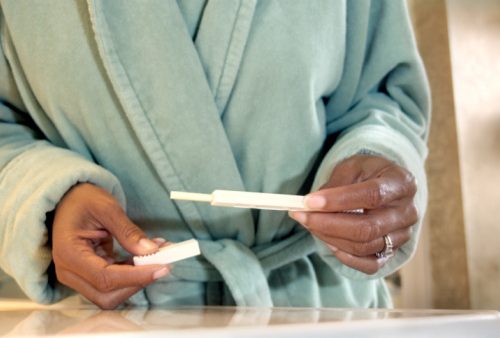 It may have appeared to be some kind of joke, or a hoax at first, but this is one story that could not only shock you, but have some actual medical backing as well.

It all started with a social media buzz that hit the mainstream with full force. The buzz was unavoidable because the story truly was a miracle. It was a story of a teenage boy who took a home pregnancy test as a prank, and naturally got a little concerned when it came back with a shocking positive result, he saw a doctor and ended up being diagnosed with testicular cancer.

The story raised more than a few eyebrows with lots of questions arising over whether or not this was possibly the screening method that could save thousands of lives, and treatment costs, with a simple and inexpensive home pregnancy test.

The reaction from the medical community was bittersweet at best. On the positive side, healthcare experts say that home pregnancy tests can detest some types of testicular cancer in men, but others warn that clearly not enough research has been done for it to be very useful as an official screening method, there is just too many outside variables at play.

But if you needed a little more explanation on this crazy new finding (the positive side anyways) according to the American Cancer Society, pregnancy tests work by detecting a hormone called Beta-HCG (in long form referred to as human chorionic gonadotropin). This is produced by the cells of a female placenta during pregnancy, but what is even more interesting, is that it is also excreted by some tumors which can manifest as certain forms of testicular cancers.

What the catch is, and why the medical community might be more than a little wary about having everyone’s husband, father or brother stop by the family planning section of the pharmacy for a cheap pregnancy test is that in most cases, men, even if they do have a testicular cancer, won’t have levels high enough to be detected by this method.  They say the pregnancy tests simply aren’t sensitive to alert men to testicular cancers, and a lot of people who are facing a cancer scare, but be falsely lured into not seeing a doctor, when they really should.

They say that even without the risk of testicular cancer it is still possible for a home pregnancy test to give a man a false positive result. It is still a good idea to see your doctor for proper screening which includes a blood test.

According to the Cancer Society, men should watch out for a lump on the testicle as the first sign of cancer, and if they feel something unfamiliar, don’t bother with the home pregnancy test, go the sure fire route and go see your doctor first thing.  The Cancer Society recommends in fact, that any form of at-home screening isn’t a good prevention method in itself. The only way to truly have some piece of mind is to go to your doctor for regular screening. So while the story of the 17 year old who got a positive pregnancy test, sure is interesting, not to mention a good catch, it shouldn’t be relied on as a solely effective method.