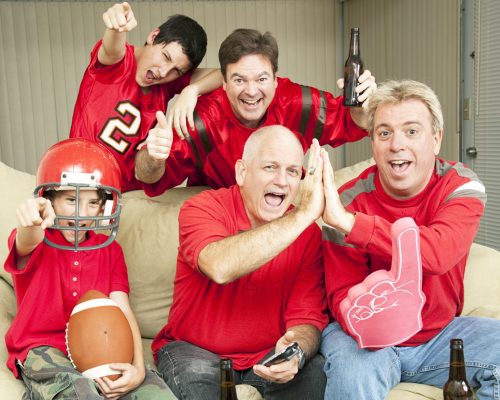 With the Super Bowl right around the corner, researchers suggest there is an influx of flu cases and even death. The findings come from analyzing data between 1974 and 2009, where researchers uncovered that during the Super Bowl there is an 18 percent higher risk of flu-related deaths among those over 65, which is the population group that is the most vulnerable to the flu and its complications.

Additionally, more flu-related deaths were seen during years of virulent flu strains, or when the Super Bowl occurred during high flu seasons.
Study author Nicholas Sanders said, “The mechanism that’s driving this is the increased socialization that happens as a result of the team being successful. You have friends over for a Super Bowl party. You all go out to a bar to watch the game. A bunch of people are cramped in a small space, and they’re all touching the same napkins and grabbing the same chips. If your team wins, you’re all out in the street celebrating. It’s that kind of disease transmission that we think might be a driving factor.”

Few seniors actually participate in typical Super Bowl festivities, but they are more likely to come into contact with someone who has the flu. Sanders added, “It needn’t be a direct leap, where an older person is at a bar watching the team. It could be that individual’s relative is at a bar, and then he visits his parents. Or a worker at a retirement home goes out to get a drink and celebrate her team’s win, and then returns to work the next day. Those are all possible disease transmissions.”

Flu prevention methods should be utilized not solely near the Super Bowl, but during the fall season, prior to when the flu usually strikes. Getting your flu shot can better protect you from catching the flu, along with frequently cleaning your hands and avoiding others who have the flu or are sick.

Sanders concluded, “Simply being aware of the situation can make people take common-sense precautions, and say, ‘Well, I’m not going to shove my hand in that bowl of nuts over there.’ I think that’s just good advice in general.”