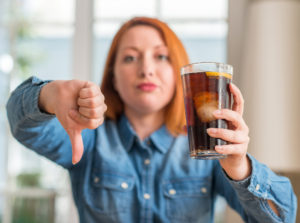 It is no secret that sugary drinks can cause health problems, but new research shows the impact they can have on cholesterol. A study from Tufts University has found that middle-aged and older adults who consumed sugary beverages daily were at a greater risk of developing abnormal cholesterol and triglyceride levels compared to those who rarely drank those beverages.

“The results suggest that high intake of drinks with added sugar, such as soda, lemonade or fruit punch, may influence risk for dyslipidemia as we age,” said corresponding and last author Nicola McKeown, a nutritional epidemiologist at the HNRCA. “One dietary strategy to help maintain healthier blood cholesterol and triglyceride levels may be to avoid drinks with added sugars.”

For the study, researchers analyzed data from more than 5,900 people with an average age of 40 years. They looked at changes in blood cholesterol and triglyceride concentrations between exams and were categorized according to the types and frequency of the beverages they consumed. The participants were examined at intervals of four years and followed for approximately 12 years as part of the Framingham Heart Study, which has monitored multiple generations to identify contributors to cardiovascular disease. Researchers adjusted for other factors that could potentially influence cholesterol and triglyceride concentrations, such as obesity, physical activity, diet quality, alcohol use, and the use of cholesterol-lowering drugs.

“With these younger participants, we did see unfavorable changes, but they were likely too young during the short follow-up period to know if they would eventually develop dyslipidemia,” said first author Danielle Haslam. “Our findings contribute to the mounting evidence that sugary drinks should be avoided to help maintain long-term health.”

Part of the study also included analyzing if 100% fruit juice or diet drinks would be a suitable replacement for sugary soda. Researchers found no consistent associations with adverse changes in cholesterol and increased risk of dyslipidemia, but they still advise moderation.

“We are better off quenching our thirst with water. The emerging research on long-term consumption of diet soda on health is inconclusive, so it is prudent to say diet drinks should only be an occasional indulgence,” said McKeown. “As for 100% fruit juice, best to limit consumption and consume whole fruits when possible.”

Many people are focused on what they eat when thinking about cholesterol levels and heart disease risk, but these new findings show that we need to be just as careful with what’s in our glass. Managing blood cholesterol and triglyceride levels is an important goal for the prevention of stroke and heart attack. So, if you haven’t kicked your soda habit yet, now is the time to do so!