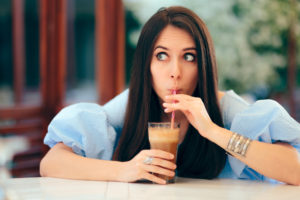 Sugary coffee drinks are tempting for many people, but they could be the cause of various health issues including poor sleep quality. A small U.S. study found that women who consume energy drinks and high-calorie coffee beverages tended to have more sleep problems compared with those who didn’t consume the drinks.

“Young adulthood is a time of intense change that influences health behaviors,” said Deborah Rohm Young, director of behavioral research at Kaiser Permanente Southern California in Pasadena. “We were specifically interested in sleep quality because not much research has been conducted on sleep and other health behaviors in young adults.”

The study published in Sleep Health included information from 462 women who had participated in a long-term study as teenagers, beginning in 2006. Researchers calculated their sleep quality based on seven aspects of sleep through a questionnaire. Questions included rating their sleep duration, how often they wake up in the night, how long they take to fall asleep, and any use of sleep medications.

This data showed that 45.2% of the young women had scores indicating poor sleep quality. The women who showed poor sleep habits were then assessed using a survey that measured how often they consumed soda, sports drinks, and sweetened coffee-based drinks such as Frappuccinos or mochas over the past seven days.

The study concluded that women who had consumed energy drinks of high-calorie coffee beverages were more likely to report poor sleep quality. The authors of the study noted that two findings stood out.

It is unknown whether the coffee-based drinks caused the women’s sleep problems, or if the poor quality of sleep leads to consuming sugary caffeinated drinks. Whichever way, it may lead to more sleep problems creating a cycle of various health issues.

Dr. Suzanne Bertisch, clinical director of Behavioral Sleep Medicine at Brigham and Women’s Hospital in Boston, who wasn’t involved in the study, said, “The relationship between sugar and caffeinated beverage intake and sleep is complicated.

Factors other than diet could also account for poor sleep in young women. A strength of the paper was that it accounted for the influence of parenting roles and employment status, she said.

“Other factors to consider are those related to mood, such as stress, anxiety, and depression; and medical conditions like migraine, which has high prevalence among young women.”

With a high number of women in U.S. suffering from poor sleep quality, more research is needed to find answers. Many physicians are looking for treatments and preventative measures to help their patients get a better night’s sleep, and study’s such as this are able to help them get a perspective of the cause of the problems.