Home » Health News » Sugar vs. Whole Fruit Is Linked with a Reduction in Blood Pressure: Study 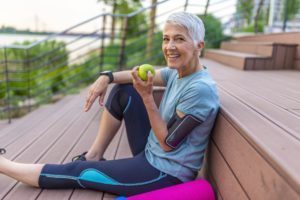 As the holiday’s approach and temptations are on every table, you may want to reach for a piece of whole fruit over a sugary treat to help reduce your blood pressure. Research from the University of Delaware suggests that enjoying a piece of fruit rather than a sugary treat is linked with a reduction in high blood pressure for both men and women.

Everyone knows that added sugar found in items such as ice cream, cookies, and cakes is the prime suspect in health problems such as diabetes and obesity. But what many don’t realize is that replacing those sugary treats with whole fruit can actually help to lower blood pressure.

New preliminary data from a study by UD’s Sheau Ching Chai has shown a strong link between added sugar and hypertension in postmenopausal females. This connection was found even after controlling for age, income, body mass index, physical activity levels, daily caloric intake, and use of blood pressure medication. The effect of whole fruits in a daily diet is also gaining interest from those with an interest in heart disease.

This new data could be a big deal, especially for older people. Two-thirds of Americans aged 65 and older have high blood pressure, which can increase the risk of heart and kidney disease.

This study was meant to examine the influence of food groups and added sugars in the diet on blood pressure levels. All major types of sugar found in a common American diet were examined in this study. These include sucrose (table sugar), glucose (found in candy, sports drinks, and desserts) and fructose (fruit sugar and a major source of added sugar in the form of high-fructose corn syrup). It did not include the effect of sugar substitutes on health.

“There is a big difference in the way each type of sugar is metabolized in our bodies,” Chai said. “And fructose, in particular, may contribute more to raising blood pressure than other types.”

“By contrast,” Chai said, “the average American eats about 17 teaspoons per day—about 66 pounds per year.”

“We’re not saying you can’t eat sugar,” she said. “The kind found naturally in whole fruit is fine.”

Whole fruits offer many valuable elements to a healthy diet including pulp fiber, vitamins, antioxidants, minerals, and other bioactive compounds. These elements not only help to reduce blood pressure, but offer many health benefits for the whole body. So, this holiday season, skip the sugary treats and reach for a piece of fruit.