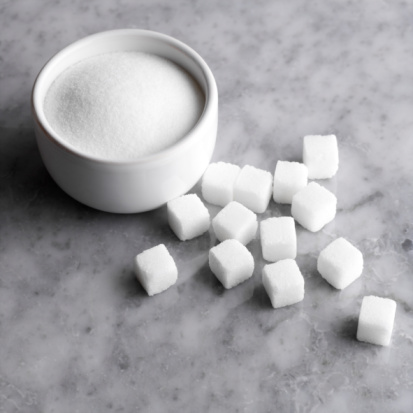 If you’ve been trying to limit the number of calories you consume to drop a few pounds, you’ve likely joined the growing mass of people who have switched from sugar to artificial sweetener. But, according to a study recently published in Diabetes Care, it turns out that artificial sweetener could be sabotaging your weight loss attempts afterall.  Researchers at Washington School of Medicine in St. Louis found that sucralose — one of the most common artificial sweeteners, found in Splenda — may actually change the way your body reacts to regular glucose (sugar), ultimately resulting in a rise in insulin and causing you to gain weight anyway.

Study on Artificial Sweeteners and Glucose

Often, doctors and dietitians advise their overweight and obese patients to switch to artificial sweeteners, in an effort to cut the calories of sugar and to avoid elevated levels of the insulin hormone in the body, which can lead to insulin resistance, weight gain and diabetes.   While sucralose has a much milder effect on blood sugar than actual sugar (glucose) does,  researchers suspected that this artificial sweetener might have an indirect effect on the body’s insulin response, causing insulin to shoot up even higher than it normally would in response to regular sugar.

To test their theory, the researchers set out to conduct glucose challenge tests on 17 obese people, who had never been diagnosed with diabetes and who did not regularly use artificial sweeteners in their diets.  A glucose challenge test is conducted by giving a participant a sugary drink, and one or two hours later, measuring the participant’s resulting blood sugar level. This blood sugar measurement reflects whether the subject’s insulin response is “normal,” whether it indicates insulin resistance (which can lead to weight gain or future diabetes), or whether the subject has diabetes.

However, prior to the glucose challenge test, half the participants were given a glass of a sucralose solution, and the other half was given plain water. Both groups were then given sugar water, and their blood sugar levels were measured ninety minutes later. The entire test was then conducted a second time, only the first group began with plain water this time and the second group started with the sucralose solution.

The results showed that when participants drank sucralose prior to consuming sugar, their blood sugar level rose 20 percent higher than when they consumed sugar alone. This result reveals an indirect, yet very dangerous, effect from this artificial sweetener, as repeated elevations of insulin in the body can lead to insulin resistance, weight gain and type 2 diabetes.

Traditionally, it was believed that artificial sweeteners do not have an effect on the body’s metabolism; instead, they react on the tongue to give the sense of “sweetness” without the calories that are found in table sugar.