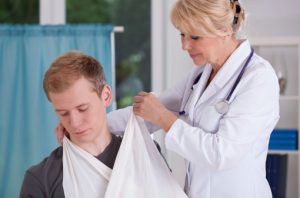 A common shoulder dislocation, known as acromioclavicular (AC) joint dislocation, has been found to be able to heal on its own without surgery. If a dislocation is severe enough, it is often treated with surgery; however, research has found that those who opt-out of surgery experience fewer complications and return back to work sooner.

If the dislocation of the AC joint is minor, a doctor will recommend a sling and physiotherapy. Dr. Michael McKee, orthopedic surgeon at St. Michael’s Hospital, said, “For severe AC joint dislocations, surgery is the common practice but there’s not much evidence to suggest this is actually the best treatment.”

Eighty-three patients with moderate to severe AC joint dislocation were followed for the study; some underwent surgery and others were assigned a sling and rehabilitation. The patients were followed for two years and researchers documented complications, levels of disability and level of satisfaction with how the shoulder looked and functioned post-surgery.

Dr. McKee added, “Three months after the initial injury, more than 75 percent of the patients who did not have AC joint surgical repair were able to return to work, whereas only 43 percent of those who underwent surgery were back at work.”

“The main advantages of surgery are that the joint is put back in place and the shoulder appears more symmetrical and pleasing to the eye,” said Dr. McKee. “The long-term implications of surgery for AC joint dislocation remain unclear when compared to non-operative treatment.”

Dr. McKee concluded, “While satisfaction with appearance of the shoulder should be a consideration, I believe surgeons should think twice before recommending surgery for an AC joint dislocation – regardless of the severity. Patients who forgo surgery return to work sooner, experience less disability during the first months after injury and have fewer complications.”