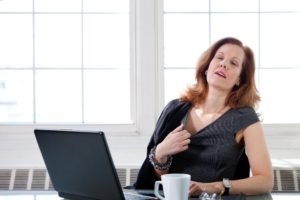 Hot flashes are brief feelings of intense warmth and sweating that commonly occur in women around the time of menopause. Although it is not exactly known what causes hot flashes, current theories suggest they are due to a drop in the estrogen hormone. It is estimated that as many as 75% of perimenopausal women in the United States experience hot flashes.

Previous studies have suggested an association between hot flashes and cardiovascular disease, but they had no “hard” evidence to link the two, including events such as heart attack and stroke, until now. This new study presented during The North American Menopause Society (NAMS) Annual Meeting in Chicago is the first to show substantial evidence of the connection.

The earlier research could not determine a definitive link between cardiovascular disease and hot flashes as it only relied on subclinical measures, which are only proxies for clinical cardiovascular disease and not actual events. Another problem with past research is that it relied on recalled measures of hot flashes from years earlier, which can be biased by memory.

This new study called Women’s Health Across the Nation (SWAN), a longitudinal 20-year study of the menopause transition, could confirm the link as it assessed hot flashes in women regularly throughout menopause transition. It also collected information on cardiovascular disease events as women aged.

Lead author of the study from the University of Pittsburgh, Dr. Rebecca Thurston, spoke about the study. “This is the strongest test of whether hot flashes are associated with actual clinical CVD events, such as heart attacks and strokes, which represent the most clinically relevant outcome. It’s the strongest because we measured hot flashes prospectively multiple times over the course of the menopause transition, which is different than most other studies of CVD events that ask women to recall their hot flashes over months or years. We also had measures of clinical CVD events, rather than other proxy measures. We brought these data together to address this important question in a more rigorous fashion than prior studies.”

As heart disease is the number one killer of women, it is critical that health care professionals understand the various risk factors. Research such as this will help to create more preventative and treatment strategies for patients going through menopause.