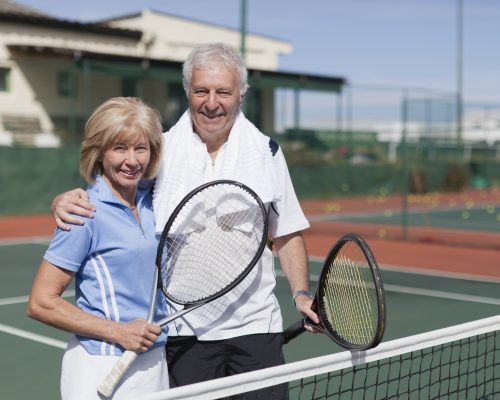 For those who suffer from knee arthritis, some forms of exercise may worsen the condition. According to a new study presented at the annual meeting of the Radiological Society of North America (RSNA), racket sports such as tennis and racquetball have been found to accelerate knee joint degeneration in overweight people with osteoarthritis (OA).

Osteoarthritis is the most common cause of pain and disability in the knees, affecting an estimated 14 million people in the US alone. The lack or loss of surface cartilage impacts the surrounding bone, tissues, and synovial fluid. In this type of arthritis, knee cartilage may thin in spots or disappear completely, resulting in areas of exposed bones.

The study, which found the relationship between knee arthritis and racket sports, analyzed participants using a high-powered MRI. All participants were drawn from the Osteoarthritis Initiative, a National Institutes of Health-supported study of individuals with mild to moderate osteoarthritis. They were a total of 415 overweight and/or obese patients with an average age of 59.

All participants were required to keep records of their participation in six different types of physical activity, including ball sports, bicycling, jogging/running, elliptical trainer, racket sports, and swimming. All were given an MRI at the start of the study and were measured over four years using the modified Whole-Organ Magnetic Resonance Imaging Score (WORMS). A higher score indicates more degeneration.

“In our study, progression of overall knee joint degeneration was consistently higher in overweight and/or obese patients engaging in racket sports,” said the study’s lead author Silvia Schirò, M.D. “We also found that workouts using an elliptical trainer were associated with reduced progression of overall knee joint and cartilage defects. Moreover, our findings showed that when comparing different low impact activities with each other, such as bicycling, elliptical trainer and swimming, the elliptical trainer was associated with the lowest increase in WORMS sub-scores over 48 months.”

Researchers hypothesize that the rapid degeneration of the knee joints in people who participate in racket sports is due to the high-speed lateral movements that come with such sports. Joint mechanics can become impaired in overweight and obese individuals with increased contact stress on the meniscus. Damage to the meniscus compromises the protective cushion on the cartilage of the knee.

This study shows that overweight individuals who continue to play racket sports could slow degeneration in their knees by switching to a sport with less fast-paced movements such as badminton or doubles tennis.
However, Dr. Schirò emphasized that “the degenerative process is complex and individual joint mechanics are highly variable.”

“It is possible that some individuals with sufficient strength and motor control may be able to safely play these sports,” she said. “Our data suggests that as a group, though, overweight and obese individuals who play racket sports are at higher risk for disease progression.”