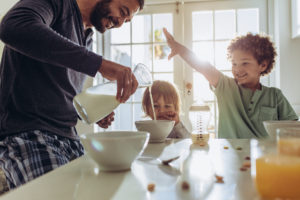 New research has discovered a relationship between high consumption of dairy and a lower risk of diabetes and hypertension. The international study found the association to be true especially in those who consumed whole-fat varieties.

With hypertension and diabetes rates rising in the U.S., many leading health professionals are looking for alternative treatments and prevention measures.

For the study, researchers analyzed data from nearly 150,000 people from 21 countries including Africa, Asia, Europe, and North and South America. All participants were required to answer questionnaires that outlined their food consumption throughout a year. They were asked how much dairy they consumed including products such as milk, yogurt, cheese, and meals made with dairy. Butter and cream intake were eliminated from the study as those items are not common in all participants’ countries. The type of dairy products was classified into two categories, either whole-fat or low-fat.

Participant’s medical history, prescriptions, blood pressure, waist circumference, and glucose and fat levels along with education were considered as these are all important factors in diagnosing Type 2 diabetes.

Dairy Consumption across the World

Over nine years, participants consumed 179 grams of milk products each day. This is equivalent to approximately a glass of milk or a cup of yogurt per day. The results which were published in journal BMJ Open Diabetes Research & Care showed that people in Europe and North and South America generally consumed more dairy than people in Asia and Africa. Low-fat was the preferred dairy among people in North America and Europe, and those in other regions consumed more whole-fat varieties.

Among those who had a minimum of two servings of dairy per day including both low-fat and high-fat, researchers found an association of a 24% lower risk of metabolic syndrome, which is a group of symptoms that increases the risk of heart disease.

Researchers were able to conclude that consuming whole-fat dairy had a stronger association than low-fat dairy with lowering the risk of diabetes and high blood pressure. No association was found for a lowered risk of metabolic syndrome and consuming only low-fat dairy.

“Higher intake of dairy foods, such as milk, yogurt, and cheese, especially whole-fat dairy rather than low-fat dairy, is associated with a lower prevalence of metabolic syndrome and with a lower risk of developing hypertension and diabetes,” said study co-author Andrew Mente, Ph.D., a principal investigator at the Population Health Research Institute, in Hamilton, Ontario.

He added, “Dairy foods and dairy fat provide high-quality protein and a wide range of essential vitamins and minerals, including calcium, magnesium, potassium, zinc, phosphorus, and vitamins A, B-12, and riboflavin.”

Many people believe that a low-fat food diet is healthy and will help to prevent health problems, but researchers hope to dispel that myth proving that whole-fat foods are healthier than reduced-fat foods. They hope to confirm their findings in larger, long term trials.