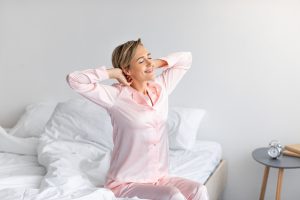 Sleep is a vital component of overall health and well-being. Despite its importance, however, many people find themselves struggling to get the sleep they need on a regular basis.

This can have negative consequences not only for physical health but also for cognitive functioning. Numerous studies have shown that sleep deprivation can contribute to a variety of physical ailments, including high blood pressure and type 2 diabetes.

Additionally, sleep plays an important role in cognitive performance, impacting our ability to concentrate and focus on cognitive tasks. Research has shown that sleep loss affects attentiveness, memory, decision-making abilities, and more. Therefore, sleep plays an essential role in maintaining both our physical health and our mental well-being.

According to researchers from the University of Cambridge and Fudan University, seven hours is the ideal amount of sleep for people in their middle age and upwards. For their study, scientists examined data from nearly 500,000 adults aged 38 to 73 years from the UK biobank. All participants were asked about their sleeping patterns, mental health, and well-being. They all took part in a series of cognitive tests along with brain imaging. Genetic data was also available for almost 40,000 of the study participants.

The research team found that insufficient and excessive sleep duration may impair cognitive performance, such as processing speed, memory and problem-solving skills, and visual attention. 7 hours of sleep a night was found to be the optimal amount for cognitive performance and good mental health. Participants who reported sleeping for longer or shorter durations experienced more symptoms of anxiety and depression and worse overall well-being.

Researchers believe one possible reason for the association between insufficient sleep and cognitive decline may be due to the disruption of slow-wave (deep) sleep. Disruption to slow-wave sleep has previously been shown to have a close link with memory consolidation as well as the build-up of amyloid, an essential protein that can signal brain characteristics of some forms of dementia, including Alzheimer’s disease. Lack of sleep may also help to hamper the brain’s ability to rid itself of toxins.

A link between the amount of sleep and the differences in the structure of brain regions involved in cognitive processing and memory was also noted.

Professor JianFeng from Fudan University said, “While we can’t say conclusively that too little or too much sleep causes cognitive problems, our analysis looking at individuals over a longer period of time appears to support this idea.”

By prioritizing sleep and making it a non-negotiable part of their daily routine, people can help to ensure that they are getting the rest they need to stay healthy and perform at their best.

Sleep Sure Plus is designed to help promote optimal sleep and restfulness. The most important ingredient in this unique formula is melatonin – a hormone essential for regulating the circadian rhythm. Helping to get the internal body’s clock back on track can go a long way to getting a restful night’s sleep.

Sleep Sure Plus also contains another 7 ingredients, which help provide well-rounded support for a better quality of sleep.